Ian Chappell feels Virat Kohli-led India have variety in their bowling attack, making them a strong contender to win the World Cup.

Former Australia captain Ian Chappell believes the Virat Kohli-led India have variety in their bowling attack, making them a strong contender to win the ICC World Cup 2019 beginning May 30 in England and Wales.

Chappell said the team which has the ability to pick wickets at regular intervals, particularly in the middle overs, was likely to lift the coveted Cup.

“In an era where big bats and big scores, with occasional monumental battering, have proliferated ODIs, there are still some seriously good bowling attacks gearing up for 2019 World Cup,” Chappell wrote in his column for ESPNcricinfo.

“Wicket-taking is going to play a crucial role in deciding this World Cup. Despite the modern gung-ho batting style, this is not an easy contract to fulfil when the tournament reaches the knockout stage. The team that consistently takes wickets — particularly through the middle overs — is the one most likely to lift the trophy,” he added.

According to Chappell, India — despite not possessing the “outright pace” like that of England and Australia — do have great variety and a trio of fast bowlers who can be exceptional in favourable conditions.

“While not possessing the outright pace of England or Australia, India do have great variety and a trio of fast bowlers who can be exceptional in favourable conditions,” he wrote.

He added, “If there’s any moisture in the pitches then Jasprit Bumrah, Mohammed Shami and Bhuvneshwar Kumar are skilled enough to take full advantage. If, however, the pitches start to wear and the conditions are dry, then Kuldeep Yadav and Yuzvendra Chahal are a dangerous wicket-taking combination.”

“Throw in Hardik Pandya as a handy fast-bowling allrounder and Virat Kohli has plenty of options,” he added.

India though lost the first warm-up game against New Zealand by six wickets on May 25. The Indian batting line-up, which boasts of having Shikhar Dhawan, Rohit Sharma, Kohli and MS Dhoni, bundled out for a low 179 at The Oval which the Black Caps easily chased down with around 13 overs to spare.

The Men in Blue will now take on Bangladesh in the second warm-up game on Tuesday before beginning their World Cup campaign against South Africa on June 5. 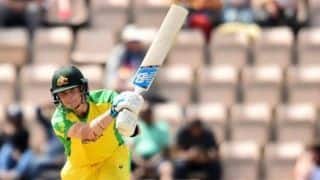 That Jasprit Bumrah no-ball in Champions Trophy final made me: Fakhar Zaman