Nicholls has recovered from a hamstring injury that saw him miss the games against Sri Lanka and Bangladesh.

TAUNTON: Gary Stead, the New Zealand coach has hinted allrounder Henry Nicholls may finally be given a game having made to sit out the first two ODIs of the ICC Cricket World Cup 2019. Nicholls has recovered from a hamstring injury that saw him miss the games against Sri Lanka and Bangladesh, while another injury-concern, Tim Southee continues to make steady recovery.

“In terms of our team, Henry Nicholls comes back into selection consideration. Tim Southee is not quite at that stage. He’s probably one game away still from being at that stage,” Stead said on the eve of the game.

“We’ve got part of the squad that was selected is making sure that we’ve got people that we can pull in and out at different positions. And Henry’s one guy that we think can cover different bases for us. And that will again depend on what we think is the right balance, against different opposition on the grounds and what the opposition – what we think they may throw at us as well.”

Stead also pointed out that although rotating his front-line bowlers through the course of the tournament doesn t seem to be that bad an idea, the key was to ensure all bowlers got decent game time.

“Our planning is for all players to be able to play every game. It’s part of I guess the conditioning programme and working things out. If we feel that players may need a rest or would do best from freshening up over perhaps a week period or something like that, we would consider it. But that will be something we – I think when you get to the World Cup you want to play what team you think is the best right throughout,” said Stead.

As New Zealand gear up to face Afghanistan in Taunton s first ODI game in 20 years, the focus will be on how their batsmen fare against Afghanistan s three-pronged spin attack. The 2015 World Cup finalists looked a bit dodgy against Bangladesh with six wickets falling to spin, and Stead weighed in on the discussion, mentioning how New Zealand have done their homework when it comes to facing such quality spin.

They’re (Afghanistan) definitely a force and one of their strength areas as well. It’s hard, I think, to put too much focus on it because out of the 45 overs we face, 30 with spins. So, a lot more will spin anyway. And we expect that when we face some of these Asian sides, in particular, the New Zealand coach highlighted.

We’ve played spin well in the past. And I think maybe the pressure of the moment a wee bit the other night made for some poor decisions, as I said before. But we’ve certainly done the homework on the likes of Rashid and Mujeeb and Nabi, the likes of those guys who are definitely going to be a force for Afghanistan.

Stead added that it wasn t the pressure of a World Cup or a chase in a tournament as big as this which caused a bit of a stutter against Bangladesh. Rather, as per the coach, New Zealand should have won the game with a lot more conviction.

I don’t worry about it. If Tom Latham had got 30 or 40 not out the other night we probably wouldn’t be having this conversation. And he’s done that a lot for us in the past as well. Stead said.

We think the balance that we’ve had in our team provides some solidarity with three, four, five — with Williamson, Taylor, Latham. And then actually we have a little bit of power, peps coming in after that with the likes of Neesham, De Grandhomme, Santner, who can provide the icing to the cake as such.

I think, if we’re honest with ourselves, if you look back at the Bangladesh game, the position we’re in, we probably should have been walking off with a six-wicket win or something like that. But strange things can happen in cricket. And I’m just thankful we were on the right side of it and got the two points.

Stead refrained from having any say in the chancy running between wickets between skipper Kane Williamson and Ross Taylor. The two experienced New Zealand batsmen had a bit to talk about between overs as their running caused a few headaches. In fact, Taylor almost would have run his skipper out had Mushfiqur, in an accident, not taken the bails off with his stumps in an attempt to collect the throw.

“Ross and Kane have played a lot of cricket together, and I know they’ve been talking about how they deal with it. I’m not sure me sticking my nose in there or doing anything different is actually going to help the situation. I think it’s just them communicating well when they’re in the middle,” Stead said.

“And hopefully what we saw last game is the only time we see it in the World Cup. They’ve played a lot of cricket together, so run-outs are one form that you can’t go out. I hope I don’t see that again.” 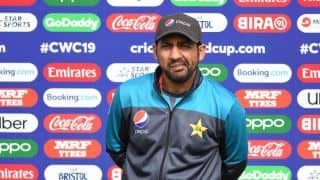