Tim Southee and Henry Nicholls are not 100% fit for the match, however.

Latham is available for selection, having recovered from the finger fracture sustained during a warm-up match against Australia in Brisbane a few weeks ago. That means that Latham will keep wickets instead of Tom Blundell, who is uncapped at ODI level.

The Black Caps have not decided on their XI for the Sri Lanka game, with Williamson confirming that Tim Southee and Henry Nicholls are not 100% fit.

“Fairly exciting for Tom. He’s progressed nicely and will be available tomorrow, which is great news. He’s very much looking forward to that,” Williamson told reporters on Friday. “Tim Southee and Henry Nicholls have some minor niggles as well, and that’s why we can’t quite name our team today. [Colin] Munro is fine with his niggle.

“We haven’t settled on it just yet. We need to get through training today. A couple of minor niggles that want to be I guess monitored before tomorrow.”

Williamson also confirmed that Trent Boult is fit for selection. 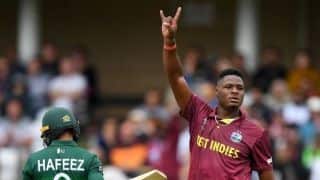