Ross Taylor has moved up to 13th and Henry Nicholls (5th) has attained a career-best rating.

On his 33rd birthday, the left-arm quick Neil Wagner has gone where few New Zealand fast bowlers have before – to fifth place in the ICC rankings for Test bowlers.

A day after he bowled New Zealand to an innings win over Bangladesh in Wellington, Wagner moved up to a career-best ranking in the latest ICC reshuffle which makes him the third New Zealander to achieve that. (READ: Wagner barrage results in ideal two days for New Zealand)

Wagner, who claimed nine wickets at Basin Reserve after bowling his team to victory in the Hamilton Test as well, now has 801 ratings points. For New Zealand, only Trent Boult (825) and Sir Richard Hadlee (909) have ever had a higher rating.

Wagner is at No 5 followed by Boult at No 7.

New Zealand’s Ross Taylor has gained 11 places to sit at 13th place in the ICC’s Test batsman rankings following his 212-ball 200 against Bangladesh while his team-mate Henry Nicholls, who made 107, sits at fifth with a career-high of 778 ratings points. 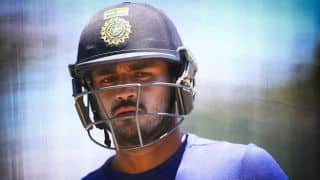