In 2001, McGrath had reached 914 ratings points after taking five wickets at The Oval.

Those six wickets added 16 points to Cummins’ tally and moved him to 914, which is the highest that Australian icon McGrath managed back in 2001 after he took five wickets in an innings at The Oval to seal a 4-1 Ashes series win.

Cummins is thus the second Australian bowler to achieve such a record ratings level.

Already ranked No 1 in the ICC rankings for Test bowlers, Cummins took 3/61 and 3/35 across two England innings at Lord’s.

In related news, Steve Smith has closed the gap with No 1 Test batsman Virat Kohli to just nine ratings points.

Smith scored a valiant 92 at Lord’s – after scores of 142 and 144 in the Edgbaston Test victory – to regain No 2 in the ICC Test batsmen rankings. 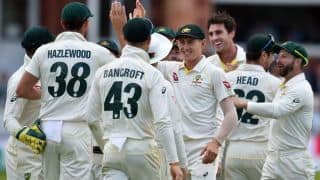