Steve Smith moves to No 2 after scoring 378 runs in three Ashes innings on comeback.

Following twin centuries against England at Edgbaston in his comeback Test match after 15 months, Smith scored 92 in the drawn second Ashes Test at Lord’s on Saturday – an innings that saw him hit on the neck by a viscous bouncer from Jofra Archer.

That innings took him past New Zealand skipper Kane Williamson to second spot in the latest ICC Test batsmen rankings.

After being floored by Archer at Lord’s, Smith was removed from the field and underwent a series of tests which showed that the 30-year-old did not display signs of concussion Smith was allowed to continue his innings at the fall of the next wicket, went back and added 12 runs to his score before being dismissed for 92.

This means that since he returned to Test cricket on August 1, Smith has scored 378 runs in three innings at an average of 126.

He is in doubt for this week’s third Ashes Test at Headingley, and Kohli has a chance to increase his lead with India playing West Indies from August 22 as well.

Sri Lanka captain Dimith Karunaratne‘s efforts of 39 and 122 in his team’s six-wicket win over New Zealand in the Galle Test have moved him up four spots to eighth, a career-best for him.

Marnus Labuschagne, who on Sunday became the first concussion substitute since the introduction of the rule, helped Australia draw the Lord’s Test on Sunday with a dogged 59 that helped him gain 16 places to 82nd spot.

Ben Stokes, Man of the Match in the drawn Lord’s Test, has moved up sixth places to 26th spot after scores of 13 and 115 not out. 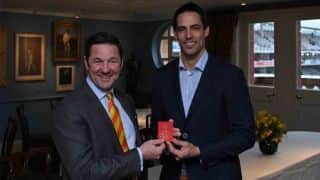