Australia have won four T20 games on the trot.

Australian cricketer Brad Hodge believes that the team’s rivals would be sweating on the prospect of meeting his side in the coming ICC World T20 2014 competition.

Hodge, who was batting at No 6 in Australia’s Twenty20 (T20) clash with South Africa flayed two sixes in the final over to seal a five-wicket win, has said that he thinks that everyone looking at the winning Australian side would definitely be a little bit concerned when they come up against them.

According to News.com.au, Hodge has said that with the ‘firepower with the ball’ and the ‘hitting artillery’ the Australian team has got most bases covered and there would be few teams worrying about them instead of others.

However, Hodge also said that conditions would determine how other teams go, as one cannot sum up who is going to be a threat until they face each other.

South Africa coach Russell Domingo reportedly identified Australia as one of many genuine contenders at the tournament and said that the World T20 is probably going to be one of the more open competitions adding that there are seven or eight teams that have a real chance of winning it.

Australia have won four T20 games on the trot and will make it five if they triumph in the match at Centurion on Saturday. 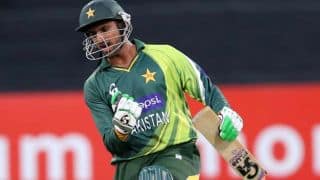