Hong Kong and Afghanistan face off in a potential doe-or-die contest on Tuesday.

After both these Group A teams suffered heavy defeats in their first game of the ICC World T20 2014 qualifiers, Hong Kong and Afghanistan face off in a potential doe-or-die contest on Tuesday, which could dictate the progress of either teams progressing from the group.

The associate nations have produced results that have raised a few eyebrows in the T20 World Cup qualifiers so far. Ireland trumped Zimbabwe and Nepal made the world stand up and take notice of their vibrant and passionate fans as well as the team’s energetic brand of cricket.

After outplaying hosts Bangladesh in the Asia Cup 2014, it was rather surprising to see the talented Afghanistan surrender tamely in their earlier fixture against the hosts. It was a tepid display for a team brimming with immense potential and knocking on the doors of achieving greater heights in the near future.

After the nine-wicket rout by Bangladesh in the first game, there might be changes ringing for Afghanistan, despite not being a setup that tinkers too much with their playing eleven. The battlers from the war-torn nation would have noticed Hong Kong’s ineptness against the Nepal spinners and might bring in Najibullah Zadran or Hamza Hotak, who can also bolster their batting department.

The Hong Kong team, who also put a shambolic display in the first game, will be relying on the team spirit that has brought them this far.

The side, made up of expatriate Indians and Pakistanis are quite skilful with the ball and did show glimpses of decent bowling potential in their previous encounter.

Tanwir Afzal can trouble batsmen but in Irfan Ahmed, Hong Kong has a pacer who has the talent to be an excellent bowler in the years to come.

The Pakistan-born bowler runs to the wicket with a lot of heart and extracts quite a bit of pace and bounce. The oldest T20I cricketer, Najeem Amar will also have a key role to play for Hong Kong with his crafty left-arm spin. Hong Kong’s Achilles heel however, is their fielding and often drop sitters and are rather schoolboyish on the field, which they can ill-afford to in this fixture.

Hong Kong’s batting has a lot riding on skipper Jamie Atkinson and the 19-year old southpaw Mark Chapman. Apart from the duo the middle order is brittle and has to put a better showing than the one that got shot out for 69 by Nepal. 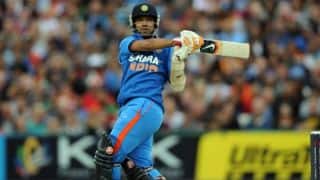