All four sides have a host of quality spinners who can turn the ties on their own.

Spinners, once considered irrelevant in hit-and-run cricket, will play a pivotal role when the ICC World T20 2014 reaches the business end with the first of two semi-finals in Dhaka on Thursday.

Among the top eight wicket-takers in the elite Super 10 round, six are spinners with South Africa’s leg-spinner Imran Tahir leading the pack with 11 wickets in four games.

Defending champions the West Indies, who clash with Sri Lanka on Thursday in a repeat of the 2012 final, boast two prolific slow bowlers in Samuel Badree and Sunil Narine.

The duo shared six wickets as the Caribbean stars demolished Pakistan by 84 runs in the last league match on Tuesday to qualify for the semi-finals.

Sri Lanka have an ace up their sleeve in veteran left-armer Rangana Herath, whose sensational figures of 3.3-2-3-5 destroyed New Zealand in Chittagong on Monday.

The second semi-final on Friday between unbeaten India and South Africa could also boil down to a spinners’ showdown between Tahir and Indian pair Amit Mishra and Ravichandran Ashwin.

Leg-spinner Mishra’s nine-wicket haul in four games has been matched by off-break bowler Ashwin’s seven wickets, helping India to become the only team to win all four Super 10 matches.

“The stats speak for themselves,” said West Indies all-rounder Dwayne Bravo. “It’s good to have two of the best in our team, but all the other sides too have good spinners.”

The West Indies start with the advantage of having played all their matches at the Sher-e-Bangla stadium in Dhaka, the venue for the knock-out rounds, while Sri Lanka come in from Chittagong.

Sri Lanka will be wary of two destructive finishers in Bravo and captain Darren Sammy, who flattened Australia and Pakistan with massive big hits late in the innings.

“It’s a game we were born to play,” said Bravo. “We just want to go there and entertain cricket fans and give them their money’s worth. We play hard, but play fair.”

South Africa, branded ‘chokers’ for their inability to win major titles, seem to have put the past behind them by scripting three narrow wins in Chittagong after losing their opening game to Sri Lanka by five runs.

“We can take a lot of confidence from those wins,” he said. “Two of those games we were not meant to win, but to win a game out of nothing is something very positive.

“India will be a huge challenge, but we are ready. It’s a big game, a semi-final of a world event. It does not get bigger than this.”

Indian captain MS Dhoni said his team was peaking at the right time, but stressed that nothing could be taken for granted in the shortest format.

“We have to bat and bowl well again,” he said. “In T20, a couple of overs can change the game so it is hard to predict how it will go.” 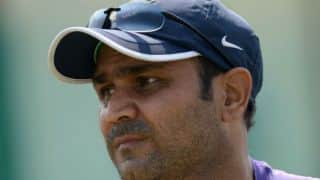 Delhi cruise to six-wicket win over Jammu and Kashmir