Kolkata: Pakistan‘s wicketkeeper-batsman Sarfraz Ahmed on Sunday said he idolises Indian skipper Mahendra Singh Dhoni and he would want to be a “finisher” like him. “Absolutely, Dhoni inspires me. He does it for wicket-keeping and batting both. He is a great keeper. I idolise him. The way he finishes an innings I would like to do the same for Pakistan too,” Ahmed told reporters here. Sarfraz has seldom played the role of a floating batsman in the side and he wishes to continue doing the same according to the necessities of the team. “I hope I can fit in wherever possible and contribute for the team. Going forward also, I will try and do the same, that is play where the team management needs me,” he said. MS Dhoni-Taskin Ahmed fan image controversy in Asia Cup 2016: Indian hackers clear air on why they hacked Bangladesh websites

Pakistan played dismal cricket in Bangladesh in the recently-concluded Asia Cup. They lost to India and then were beaten by hosts Bangladesh. Speaking about their Asia Cup campaign, the 28-year-old said, “Conditions were difficult in Bangladesh. For every team the first six overs were really very difficult. But now we have sorted things out and hopefully we will do well here.” India lock horns with Pakistan in a World Twenty20 group game at the Eden Gardens here on March 19 and Sarfraz believes there will be pressure on both sides to do well. MS Dhoni: I don’t mark the stumps that I collect

“It is a big game. Both teams will be under immense pressure. The atmosphere will be great, I am sure. Also we have never won in a World Cup [against India]. We will try and win here and break the jinx. We will try to play good cricket,” he said. “As for me, I have played in India-Pakistan games before. The big crowd will be a motivation and we will go for a win.” Sarfraz who is known for his swashbuckling batting, said he would try and stick to his natural style of play, “I just have one style. I will try and play my natural game,” he added. 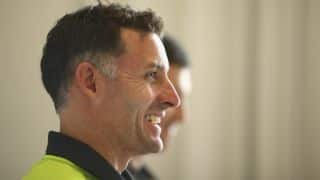