Wade said he was previously told by Hohns he wasn't gaining selection because he batted too low in Tasmania's order.

In-form wicketkeeper Matthew Wade has blasted Cricket Australia after he was overlooked for a recall to the Test side to face Sri Lanka, saying he and other players were unclear about the criteria for national selection. (ALSO READ: Australia call up in-form Patterson for Sri Lanka Tests)

Wade, who whacked an unbeaten 84 from 49 balls for the Twenty20 Big Bash League‘s Hobart Hurricanes on Monday night, has scored over 1,000 runs across all formats this summer. (ALSO READ: Injured hamstring forces Nuwan Pradeep out of Australia Tests)

The 31-year-old has also been the leading run scorer in the domestic Sheffield Shield with Tasmania. (ALSO READ: Boland backs Burns to fire if selected for first Sri Lanka Test)

Despite his performances, selectors opted to add Kurtis Patterson to the squad for the first Test starting Thursday, with national selector Trevor Hohns hailing his back-to-back centuries for a Cricket Australia XI in Hobart last week.

“I get told one thing, then I see the comments in the paper the next day about Kurtis piling runs on and getting picked,” Wade said after the BBL game, cricket.com.au reported.

“I’m not sure what’s going on. It’s just a little bit frustrating that on one hand you can say one thing about one player and on the other hand (say) it’s why someone’s getting picked.

“I don’t think I’m just talking for myself, I think all players around the country… if the criteria is hundreds and scoring runs, then pick the guys that are doing it. If that’s not the criteria, then let us know.”

Wade said he was previously told by Hohns he wasn’t gaining selection because he batted too low in Tasmania’s order.

Wade has played 22 Tests and 94 one-day internationals for Australia, but only averaged in the twenties with the bat in both formats has not appeared for a national team since October 2017.

Australia’s batting line-up has come in for criticism after their poor form during the home Tests against India, with question marks over selectors’ picks such as Aaron Finch, who has a poor record in the longer forms of the game. 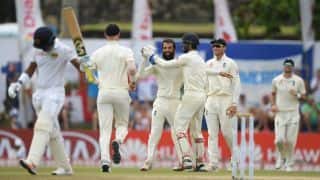