Dhoni, batting with Umesh and later Chahal refused approximately eight singles, backing himself to take most of the strike.

Jasprit Bumrah defended MS Dhoni‘s refusal to take singles while batting with the tail against Australia in the first T20I in Vizag on Sunday. Put into bat, India started off well but from 80 for 3, slumped to 109 for 7. Dhoni, batting with Umesh Yadav and later Yuzvendra Chahal refused approximately eight singles, backing himself to take most of the strike.

But the former captain hit just one six in his innings of 29 not out as India went on to lose the match by three wickets. Pat Cummins scampered for a double and hit the winning runs of the last ball of the innings to give Australia a 1-0 lead. (READ: Maxwell fifty guides Australia to three-wicket win over India)

“We were trying our best. We were figuring out. He was trying to take the game deep and get us to a safe total which we tried. I think we fell short by 15-20 runs but he still gave us a fighting total. We had something we could fight on so that was the plan which he was trying to execute,” Bumrah said. (READ: Bumrah second Indian to 50 T20I wickets)

“We almost pulled off this game but on this wicket around 140-145 would have been a very good score because there was no bounce and it was difficult to play big shots. So it’s always tough to chase totals on these wickets.”

India batted first to post 126 for 7, but Australia found themselves were in a rut, losing wickets in regular intervals. Both teams endured failure from their middle order, but Glenn Maxwell‘s 56 off 43 proved to be the game changer. Despite KL Rahul scoring half-century, Bumrah believes Maxwell triumphed because of the advantage of knowing the target.

“It’s a little different because once you know what your target is, you can hit one boundary and not afford to take risk. We were batting first so we were figuring out what a safe total is. I think that was the difference, maybe. They were rotating the strike after every boundary. But in the end, it was a good match,” Bumrah said.

“Maxi always, in this format of the game, plays with a lot of freedom. In the shorter format, you can express yourself. And when you have a smaller target such as this, it was ideal for him. He was hitting one boundary and trying to rotate the strike. He was clear about the plans he wanted to execute.”

Bumrah became the second Indian bowler after R Ashwin to 50 T20I wickets. His 49th wicket was Australia captain Aaron Finch who was trapped lbw for a golden duck off the first ball of Bumrah’s second over. He returned to bowl the 19th over of Australia’s chase, and with his penultimate delivery had Peter Handscomb top-edge a pull that was taken by Dhoni, running towards short fine leg.

“Not a lot, I’ve been just focussing on what my strengths are,” Bumrah said. “The wicket was a little difficult to bat on; it was not easy to go heavily on this wicket because to play big shots on this sluggish wicket was a bit difficult. So I was just figuring out my options, what I should do and I was trying to execute that.”

It was the dismissal of Handscomb that brought India back in the match. With Nathan Coulter-Nile departing to leave Australia at 113 for 7, 14 runs were needed off the last over bowled by Umesh Yadav and it took calm nerves from Cummins to take Australia over the line.

Admitting it was tough to bowl, Bumrah added that it could have anybody’s game.

“It always goes both ways because once you bowl the last over in a close came during death overs it is sometimes 50-50. You try your best; you’re always clear in your execution. Some days it works, some days it doesn’t. Nothing to be worried about. We would have wanted to close the game in our favour. But this happens because death bowling in tough in any situation,” said Bumrah. 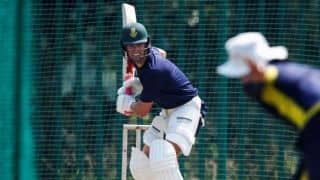