Maxwell set the tone for the run chase as he bludgeoned six boundaries and two towering sixes en route to his 56 that came in 43 deliveries.

Visakhapatnam: In a match that swung both ways till the last ball, Australia managed to hang in there with Glenn Maxwell, who scored a stroke-filled half-century, leading from the front as the tourists beat India by three wickets in a thrilling opening Twenty20 International of the two-match series at Visakhapatnam on Sunday. This is the first time India have lost two consecutive Twenty20 Internationals since 2016 and it s also their first defeat in eight T20Is at home.

India, having set a below par 127-run target, were right in the game till the final over. Jasprit Bumrah, who became the second Indian bowler to scalp 50 T20I wickets, picked two wickets over — of debutant Peter Handscomb (13) and Nathan Coulter-Nile (4) — and brought the equation down to 14 off the last over. (ALSO READ: Jasprit Bumrah becomes second Indian bowler to take 50 T20I wickets)

Umesh Yadav, who was expensive on the day, going for 21 in his earlier three overs, was handed the ball, but his death bowling went for a toss as Pat Cummins smashed a brilliant boundary past cover on the fifth delivery to bring it down to two runs in one ball.

In the last delivery of the innings, Cummins managed to squeeze it past the bowler as he scampered back for a brace to trigger wild celebrations in the Australian camp.

Maxwell set the tone for the run chase as he bludgeoned six boundaries and two towering sixes en route to his 43-ball 56-run knock. Opener D Arcy Short contributed with a run-a-ball 37 which included five boundaries.

Bumrah, who pulled things back at the end, returned with figures of three for 16 in his four overs, while Yuzvendra Chahal and Krunal Pandya added one wicket each.

Earlier, after being put into bat, comeback man KL Rahul struck a fluent half-century, but received no support from the other end as India were restricted to a paltry 126/7. (ALSO READ: Indian players wear black armbands to mourn martyrs in Pulwama attack)

Rahul vindicated his selection during his fine 36-ball-50, but some inexplicable shot selection from the other Indian batsman, that saw only 46 runs were scored in the 10 overs, meant that the hosts slipped from a comfortable 80 for two in 9.5 overs and lost four wickets for 20 runs by the 15th over to be reduced to 100 for six.

MS Dhoni tried to stem the flurry of wickets with an unbeaten 29 off 37 balls but the total was definitely sub-par in the end. The only highlight of the Indian innings came from Rahul and captain Virat Kohli, who conjured 55 for the second wicket.

Kohli, returning after being rested from the alst two ODIs and the following three-match Twenty20 International series against New Zealand, was looking good, but his 17-ball stay that yielded 24 was brought to an end by Adam Zampa after the Indian captain found Coulter-Nile at long-on.

In the next over, Rishabh Pant misjudged a single and Jason Behrendorff dived to his left and released the ball quickly to ‘keeper Handscomb to effect a run-out.

Rahul departed immediately after reaching his fifty in an over where Coulter-Nile (3/26) also breached Dinesh Karthik‘s defence with an off-cutter. 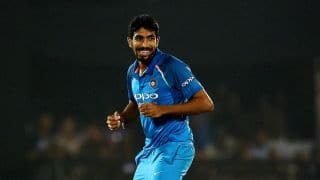