Finch conceded that the hosts failed to pick wickets at regular intervals.

India pulled off an exceptional run chase with captain Virat Kohli at the helm of it with a fine century his 39th in ODIs and 24th in run chases as the tourists levelled the three-match series 1-1 after a six-wicket win against Australia at the Adelaide Oval on Tuesday. (India vs Australia, 2nd ODI, Adelaide Oval: FULL SCORECARD)

Kohli, who scored 104 off 112, combined with his senior pro MS Dhoni as the duo stitched 82 runs for the fourth wicket. Dhoni, who has been criticised lately for his slow strike-rate, brought up his second half-century to remain unbeaten on 55 off 54.

Australia captain Aaron Finch conceded that the hosts failed to pick wickets at regular intervals while also having to run into Dhoni, who registered his 69th ODI fifty.

When you come up like a batting side against India, you know you have to get wickets regularly, and we ran into that man Dhoni as well. Credit to India, they played well. We played well as well, it was a good game of cricket, Finch said at the post-match conference. (ALSO READ: Virat Kohli in a league of his own: Twitterati lavish praises on Indian captain after reaching 39th ODI century)

Australia set a dauting 299-run target that came on the back of a scintillating century by Shaun Marsh, who top-scored with 131 off 123. The elder of the Marsh brothers registered his first century against the touring Indian team.

Shaun Marsh’s was a hell of an innings. He was pretty cooked by the end of it. To get 138 (Marsh scored 131) in brutal conditions this afternoon, with that heat, and for us to get 298, was pleasing, but in the end they managed to get past that, Finch said.

Finch took responsibility of his slump in form. He was dismissed for 6 after being cleaned by Bhuvneshwar Kumar on the last ball of the seventh over.

What we’ve been working towards is some real solid performances through the middle overs. I’m responsible for the Powerplays, and I’ve not been coming off. It’s a matter of time, I think. It’s not easy when you’re not getting runs, but captaincy is separate from personal performance, and you have to be consistent with your actions, he said. 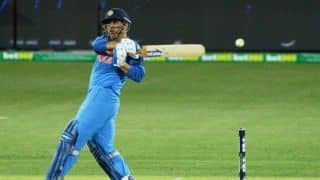