Follow all the live updates from the 1st T20I between India and Australia to be played in Brisbane.

Overs 16.3: WICKET! The Australians are ecstatic. Even though it’s Krunal Pandya they have removed, a dot ball plus a wicket is worth more than gold at the moment. A terrific catch from Glenn Maxwell in the deep. India 163/6

Overs 16: Dinesh Karthik ends the over with a four – a much needed boundary. India need 13 off the final over now.

Overs 15.3: WICKET! Andrew Tye must be a relieved man now as he has dismissed Rishabh Pant on 20. A bold attempt from Pant as he attempted a reverse scoop but only manages to hit it to Behrendorff at point. India 157/5, chasing 174

Overs 14: A big over for India! 25 runs from it. Rishabh Pant struck a six off the very first delivery and followed it with a four between long-on and midwicket. A single brought Dinesh Karthik on the strike who clattered a four and a six off the final delivery. India 139/4, chasing 174

Overs 11.4: WICKET! End of Shikhar Dhawan’s knock. Is that the match for India then? An upper cut from the left-hander but he finds Jason Behrendorff at third man to hole out for 76. India 105/4, chasing 174

Overs 10.2: DROPPED! Adam Zampa fails to hold on to a catch from Shikhar Dhawan off his own bowling. Dhawan was on 65.

Overs 10: Marcus Stoinis comes into the attack now. Nine runs in it. Score 93/2

Overs 9: Six runs and a wicket from Adam Zampa’s second over. Score 84/2

Overs 8.2: WICKET! KL Rahul has been given out stumped off Adam Zampa. The decision was referred to the third umpire. That looked close. However, umpire rules it as out after Rahul didn’t get his leg back in time. He scored 13. India 81/2, chasing 174

Overs 8: Dhawan is in red-hot form tonight! He’s thrashing Australian bowlers. He starts the over with a six over square leg off the second delivery, then sends the ball rolling through covers for a four and ends the over with a four straight past the umpire. 17 runs from it. Score 78/1

Overs 7.2: FIFTY for Shikhar Dhawan – gets there with a couple off Behrendorff. It’s his ninth of T20I career.

Overs 7: KL Rahul hits his first boundary of the innings – cuts one through point. Eight runs from the over. India 61/1, chasing 174

First over of spin – Adam Zampa introduced into the attack

India have scored 53/1 in Powerplay overs

Overs 6: Andrew Tye comes into the attack now. And Shikhar Dhawan continues in the same vein – collects two more consecutive fours to take India score past the 50-run mark. 12 runs from the over. India 53/1, chasing 174

Overs 5: KL Rahul has walked in at No.3 instead of Virat Kohli. Meanwhile, Dhawan collects sixth four to make it 10 runs from the over. India 41/1, chasing 174

Overs 4.1: WICKET! Jason Behrendorff strikes for Australia – Rohit Sharma charges forward, flicks it high in the night sky and Aaron Finch calmly gets underneath the ball to complete a decent catch. He scored 7. India 35/1, chasing 174

Overs 4: Shikhar Dhawan starts the over with a four – a pull to square leg. Eight runs from the over. India 35/0, chasing 174

Overs 3: Another four by Shikhar Dhawan, this time down the ground, off Jason Behrendorff but the Australian comes back well. Nine runs off it. India 27/0

Overs 2: Billy Stanlake with the new ball and Shikhar Dhawan is being rushed with the extra bounce but he gets a four and seven runs off it. India 18/0

Overs 1: Jason Behrendorff starts the proceedings for Australia and 11 runs off it. Two fours by Shikhar Dhawan and he is up and running. India 11/0

Overs 17: So a good comeback from India after the rain-break. Just six runs from the over. Australia post 158/4

Overs 16.2: WICKET! Japsrit Bumrah gets rid of Glenn Maxwell first ball after the resumption. A slower one to start with and Maxwell ends up hitting the ball into the hands of Bhuvneshwar at square leg. He scored 46. Score 153/4

Players are back in the middle. Jasprit Bumrah to continue

UPDATE: The rain has subsided. It will be a 17-overs-per-side contest now. Australia will face five more deliveries

Update: Well, more covers are coming on. Looks like it has started to rain again

If India has to bat now, their target in 16 overs will be 172#IndvAus#AusvInd

Well, it doesn’t look good as of now

It’s pouring here at The Gabba. We will get back with an update soon #TeamIndia #AUSvIND pic.twitter.com/nmNkWYJjX2

Weather update: Rain has made an appearance. ‘It’s coming down heavily now’, says Sunil Gavaskar. The players have returned to the dressing room.

Overs 16.1: DROPPED! Khaleel Ahmed has dropped a sitter at third man – Short and wide, Stoinis slices it hard and is lucky as the fielder fails to hold on. He was on 30. Score 153/3

Overs 16: A forgetful outing for Krunal Pandya today. He’s leaked 17 runs in his final over that included a six each to Marcus Stoinis and Glenn Maxwell. He has been creamed for 55 runs in 4 overs. Score 152/3

Overs 15: The Australians have done well to see off the threat posed by Kuldeep Yadav. They haven’t taken any chances since his double-strike. Eight runs from his final over. He finishes with 2/24. Score 135/3

Overs 14: Glenn Maxwell goes bang bang! Krunal Pandya has been clattered for three consecutive sixes – twice over long-on and once to midwicket. 23 runs from the over. Score 127/3

Overs 13: Khaleel has been expensive today. Marcus Stoinis has struck two fours in his third over – the first one a pull to midwicket and the second a full toss over smashed over the bowler’s head. 14 runs from the over. Score 104/3

Overs 11.5: Marcus Stoinis goes for a reverse-paddle but gets pinned in front. Umpire has raised his finger but after consulting Glenn Maxwell, Stoinis opts for DRS. And the ball-trackers shows the ball would have gone over the stumps. Good review by Australia. Score 89/3

Overs 11: Marcus Stoinis is the new man in the middle. He’s starts off with a couple and a four off the first two delivery faced. 11 runs and a wicket in the over. Score 83/3

Overs 10.1:WICKET! Another big strike from Kuldeep Yadav and this time he’s gotten rid of the big-hitting Chris Lynn. A wrong’un from the chinaman and Lynn ends up hitting it back to the bowler for an easy catch. He scored 37 off 20. Score 75/3

Overs 10: In an otherwise decent start from Krunal Pandya, Chris Lynn manages to clatter yet another six – this time over long-on. He has moved on to 37 off 19. Eight runs from the over. Score 75/2

Overs 9: End of an excellent over from Kuldeep – just four runs in it and a wicket. Glenn Maxwell is the new man in for the hosts. Score 67/2

Overs 8.3: WICKET! Kuldeep Yadav has ended Aaron Finch’s innings om 27. A huge wicket for India as Finch gets an edge to be caught at backward point by Khaleel Ahmed. Score 64/2

Overs 7.3: FIFTY up for Australia

Khaleel Ahmed is back

Captain Kohli with a heart-warming gesture before the start of game at The Gabba #TeamIndia #AUSvIND pic.twitter.com/KPANHQ78FT

Overs 7: A loud appeal for LBW against Finch off the penultimate delivery but umpire doesn’t agree. Four runs from the over. Score 42/1

First over of spin today. Kuldeep Yadav introduced into the attack.

Overs 6: A poor ball first-up from Bhuvi – bowls down the leg and Finch easily glances it to fine leg for his third boundary. Seven runs from the over. Score 38/1

Overs 5: Chris Lynn gets off the mark with a four off the first delivery faced – driven through covers. 7 runs and a wicket from the over. Score 31/1

Overs 4.1: WICKET! Khaleel Ahmed strikes with his first delivery of the match. D’Arcy Short holes out to Kuldeep Yadav on 7. A full length delivery and Short lifts it high but doesn’t get the distance. Kuldeep runs backward and takes a brilliant catch at mid-on. Score 24/1

Overs 4: An expensive over from Bumrah. Though he was unlucky as his captain dropped an easy catch. Finch capitalised on it by driving on to long-on for his first four and then an inside edge rolled past the fine leg boundary for a second successive four. 12 runs from the over. Score 24/0

Overs 3.1: DROPPED! Virat Kohli drops Aaron Finch at covers! A straightforward chance for the India captain but the ball bursts through his palms. Finch was on 6.

Overs 3: After 17 watchful deliveries, Australia get their first boundary of the innings. A short delivery and Short pulls it away for a four. Seven runs from the over. Score 12/0

Overs 2: Jasprit Bumrah joins Bhuvi from the other end. Four runs from Bumrah’s first over. Score 5/0

Over 1: After playing five dot balls, D’Arcy Short gets off the mark by working one to deep square leg region for a single. A good start from India. Just one from the first over. Score 1/0

Update: Australia openers Aaron Finch and D’Arcy Short are out in the middle. Team India in a huddle. Play to start in a minute. Bhuvneshwar has the new ball.

TOSS: The two captains are out for the toss. And it’s India who have won the toss. Virat Kohli opts to bowl first

Hello everyone! The D-day is here. India vs Australia. The tour kicks off with a three-match T20I series with the first contest to be played at the Gabba in Brisbane. Current form places India in the favourites column but as it’s said, never underestimate Australia in home conditions.

Unlike past tours to Australia, this time around India begin with a distinct advantage. Kohli s team is ranked second in T20Is after winning 13 of 16 matches this year, which includes a 2-1 series win in South Africa in February, the tri-series Nidahas Trophy title triumph in Sri Lanka, a 2-0 win over Ireland, 2-1 in England and most recently 3-0 over West Indies. Click here to read more 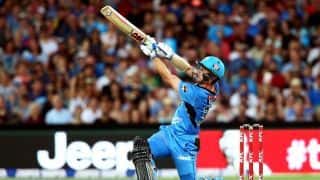