Kohli s team is ranked second in T20Is after wining 13 of 16 matches this year, while Australia are third with nine wins from 16.

Unlike past tours to Australia, this time around India begin with a distinct advantage. Kohli s team is ranked second in T20Is after winning 13 of 16 matches this year, which includes a 2-1 series win in South Africa in February, the tri-series Nidahas Trophy title triumph in Sri Lanka, a 2-0 win over Ireland, 2-1 in England and most recently 3-0 over West Indies.

In Kohli they have the best all-format batsman in the game, with KL Rahul ranked fourth in T20Is and Rohit Sharma seventh, while in the bowling the masterful pair of Bhuvneshwar Kumar and Jasprit Bumrah are back to add strength to an attack featuring the fourth-ranked T20I bowler, Yuzvendra Chahal, and Kuldeep Yadav. Confidence is high, as Rohit stated this week, and now channeling the good vibrations into the first match of a tough tour is what India need to do. They are a team that walk the talk in limited-overs cricket, and will back themselves to win again after sweeping Australia 3-0 in T20Is in 2016.

Australia are led by the second-ranked batsman in T20Is, Aaron Finch, to go with Glenn Maxwell the No 1 allrounder, but have issues with their batting. Australian have won nine of 16 T20Is this year, losing seven which includes a run of five defeats in six games – to Pakistan in the final of a tri-series in Zimbabwe followed by three to Pakistan in the UAE last month and now on Saturday to South Africa in a one-off.

However, their home form is much better with four straight wins before the recent loss to South Africa.

Weather: Mostly sunny with a high of 31 degrees

The squad is the same as the one picked to face South Africa last week, so few changes are expected. Chris Lynn has not crossed 44 in nine T20Is this year, from which he averages 18.11 while D Arcy short has scores of 4, 2, 10 and 0 since he collected consecutive fifties in Zimbabwe in July. Both are expected to bat in the top three, with Ben McDermott – he of three successive run-outs in T20Is – dropping down the order.

Australia will play four fast bowlers in Nathan Coulter-Nile, Andrew Tye, Jason Behrendorff and Billy Stanlake as they plan to target Rohit with short balls at the Gabba.

India have named their 12 for the series opener, leaving out Manish Pandey from the last T20I they played. Bhuvneshwar and Bumrah are back, with Krunal Pandya at No 7 as the spin-bowling allrounder and the left-armer Khaleel Ahmed as the third pacer on a lively Gabba surface. Chahal is the 12th man on the team sheet.

With Kohli slotting back for his T20I since July, Pandey has made way. Rishabh Pant will keep wickets and Dinesh Karthik will play as a specialist batsman. – India have won 11 of their past 12 T20Is, including eight from nine away from home.

– India have a good record in T20Is in Australia – four wins and two losses, of which three came in a landmark sweep in 2016.

– The last time these teams met in T20Is, Behrendorff claimed 4/21 in an easy win for Australia.

– Australia have won two of three T20Is in Brisbane.

When we step onto the field we have 11 individuals who are striving for excellence and want to be the best that they can be. Those performances come together and then we look lovely as a team, which is what you want in a team environment. – Kohli

Virat plays the game that gets the best out of himself, and I think that at times, for him that’s about being verbal for his team, and pumping them up and being right in the contest. – Finch 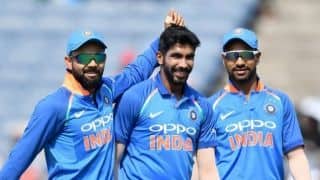 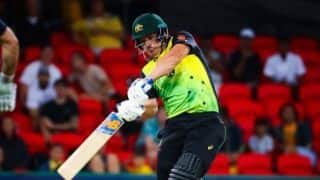