Day report: Following an opening stand of 112, Australia were pegged back on a very uneven Optus Stadium surface

And that’s the day – Australia finish with 277/6 with skipper Tim Paine (16*) and Pat Cummins (11*) adding 26 runs so far for the seventh wicket. Eventful day it was, starting off on a rather dull note (keeping in mind the build up) with the pitch not doing much. Indian bowlers weren’t that good either in the first session. Australia took lunch on 66/0. In the second session India fought back well and took three wickets to reduce Australia to 145/3. Marcus Harris scored 70, Aaron Finch made 50. Usman Khawaja failed to get going and departed for 5 off 38 balls. Part-timer Hanuma Vihari claimed the big wicket of Harris. Skipper Virat Kohli took a one-hander to remove Peter Handscomb for 7 right after tea. Travis Head (58) and Shaun Marsh (45) put in the recovery act for Australia before Vihari grabbed his second in the form of Marsh. Head then slashed one straight to Mohammad Shami at third man, before Paine and Cummins saw off the day. Two wickets for Vihari, two for Ishant.

Tim Paine and Pat Cummins had managed to survive the new ball and the exaggerated movement from the Optus Stadium track . Australia 273/6 with two overs in the day to go.

How do you even describe that!

WICKET – Travis Head loses his head and slashes a full and wide one from Ishant Sharma, first ball with the second new ball, and finds Mohammed Shami wide of third man, straight down his throat. That’s an undo of his own hard work. He goes for 58 off 80. Australia 251/6

Oh, what a feeling for India late on day one with this ripper grab from Ajinkya Rahane!#AUSvIND | @Toyota_Aus pic.twitter.com/jImfIOFY2k

That’s 50 for Travis Head in quick time. Tim Paine is in the middle with him. He would hope the skipper can rally and take Australia past the 300-run mark. If the hosts don’t manage 300, the will be disappointed.

WICKET – Hanuma Vihari is proving to be the best bowler in the seamer-friendly PErth. He scalps another big wicket of Shaun Marsh for 45. Marsh goes for the cut and edges it to Ajinkya Rahane at slips. Australia 232/5

That’s 200 up for Australia. Shaun Marsh and Travis Head have taken their team out of a hole with a breezy 50-run stand.

DROPPED – It’s Rishabh Pant. He has been chattering on for a while putting pressure on Travis Head ,but no the pressure is on him. Hanuma Vihari bowled a short and wide delivery, Shaun Marsh went back for the cut and a thickish outside edge lands deep in Pant’s gloves and pops out. Australia 194/4

WICKET – What a catch by Virat Kohli at slips. One-hander with a full stretch after Peter Handscomb was stifled with extra bounce and lack of room. Good start to the session by India. Australia 148/4

TEA: Eventuful session it was. Australia were off to a positive start. Aaron Finch and Marcus Harris scored runs at a rapid pace before Jasprit Bumrah find his mojo back and trapped Finch in front for 50. After the wicket, Indian bowlers sustained pressure and new batsman Usman Khawaja had a tough outing in the middle, lasting 38 balls for just five runs before edging one off Umesh Yadav to Rishabh Pant. But the surprise package was the part-timer Hanuma Vihari who extracted serious amount of bounce and cramped the well-set Harris for room. The batsman managed an edge to Ajinkya Rahane at slips. He made 70. In all, Australia made 79, losing three wickets to finish second session at 145/3 with Shaun Marsh and Peter Handscomb in the middle.

WICKET: Would you believe it! Part-time offspinner Hanuma Vihari has a wicket at Perth in the second session of day one in his second over. The well-set  Marcus Harris was surprised by the amount of bounce Vihari managed to extract from a ‘back-of-a-length’ length and Harris, on the backfoot, was cramped for room managing an edge to slips. Big blow for Australia. Australia 134/3

WICKET – Umesh Yadav strikes – that’s bounce at play as Usman Khawaja who was troubled by Jasprit Bumrah falls while trying to slash a rising delivery, there was not enough room to cut yet Khawaja went for it and that’s an edge, duly taken by Rishabh Pant. Australia 130/2

Lively session of fast bowling from Ishant Sharma and Jasprit Bumrah. That wicket of Aaron Finch has really propped up Bumrah in particular. Usman Khawaja in for a hard time. Bumrah has bowled 18 successive dot balls to Khawaja. Good pressure maintained by India. Something has to give.

WICKET – And there’s the breakthrough – Jasprit Bumrah traps Finch in front. It was full delivery just a hint of seam movement inwards and Finch is plumb in front. He goes for 50. Australia 112/1

Bowling change and Hanuma Vihari comes on to bowl and Aaron Finch likes it, he takes two fours and a single to get to his 2nd Test fifty

100 up for Australia: The Australian openers have picked up the pace in the second session and roughly 20 minutes in to the session have taken their team to 103/0. Marcus Harris unbeaten on 55, Aaron Finch not out on 41

And as we talk about the pace and bounce of the Optus Stadium track, how about this?

Marcus Harris on the charge – looks like David Warner with better technique – Cracker of a shot off a fuller one from Mohammed Shami. Down on on one knee clobbers a drive in front of square. The next ball keep dangerously low, but the third Harris replicates his previous shot, just a bit straight -Two fours and he is off after the lunch break.Australia 78/0

Second session underway Umesh Yadav starts off the proceedings with a loose one first up and then Aaron Finch drives one for 3 runs.

Fair to say good toss for Tim Paine to win? Yes it is. This is the first time in their last 20 innings that Indian bowlers have failed to claim a wicket in the first 13 overs of the match. Here that wicket-less streak has extended to 26 overs. Ishant Sharma and Jasprit Bumrah lacked rhythm. Shami, as usual, was as effective as he has ineffective. Umesh too took his time to settle in. Only Hanuma Vihari is left to bowl. So, Indian bowlers have been marginally better in the second hour, as the lunch break approaches – with the new ball the Indian pace quartet gave away 45 runs in 12 overs, but in the next 12 they have plugged the runs with some tight line allowing Australia to score just 19 runs. Will this sustained pressure led to a wicket for India? Indian fans will hope so. But Marcus Harris has been rock solid so far and is batting on 35. Finch is looking a bit fidgety, but is is also out there on 28 off 79 balls.

Remember our excitement on India fielding an all-pace attack – well the four horsemen haven’t had the best of times in the new Optus Stadium. 21 overs have been sent down and no wickets yet for the quicks. The sun is beating down now and the bowlers will struggle, their pace will drop. Aaron Finch was tested early, but seems to have settled well, while Marcus Harris has been very industrious in his approach and it has been effective so far.

Drinks break over – and Jasprit Bumrah is back for his second spell You don’t want show this to Virat Kohli or Ravi Shastri, do you?

India appeared to opt for Umesh’s pace ahead of Bhuvneshwar’s accuracy. Since the start of 2015 no Indian pace bowler has pitched a higher proportion of his deliveries on a good line and length than Bhuvneshwar’s 44%. #AUSvIND

Marcus Harris goes to 28 – after being dismissed for 26 twice in the first Test – he clips one on the pads from Umesh Yadav for 2 and with a four Harris brings up the 50-run stand for the opening wicket. Terrific start for Australia. Aus 53/0 Here that’s close call on Finch

Mohammed Shami on for Jasprit Bumrah and he gets one to nip back in – the very first ball and there’s a loud appeal against Aaron Finch. Umpire Chris Gaffaney doesn’t think that’s out, but India take the review. Replays show the ball would have missed the stumps, so India lose their review. Second ball, the exact same sequence, but India don’t take the review. Replays show the balls would have clipped the stumps and if the review was taken it would have been an Umpire’s call, thus India would have kept their review. The Jury is still out

India going in with 4 seamers on a greenish track, still think a spinner would have been a better option. Aussie openers showing the intent which was missing in the last game #AUSvIND

That Ishant Sharma no-ball – here it it, what do you think, I will call it a harsh one. That’s wasn’t a no-ball.

Two sumptuous drives from Marcus Harris one towards long on and the next ball towards long off. Great timing, but Ishant was a tad full on both the occasion. He bowled a no-ball in the over and that could have led to erring in length for him. His speed was also down for the two boundary balls as well. Ishant struggling? Or is it too early to say. Australia though have had it easy so far. 27/0  India have not got their radar right in the morning, well, here’s the proof

India are struggling to get their radar going this morning. Not one delivery in India’s first three overs would have hit the stumps. #AUSvIND pic.twitter.com/kbmQAAheOJ

The new Optus Stadium is full of life – enough movement, swing & bounce – but both Ishant Sharma, and Jasprit Bumrah have not found their rhythm yet – Australia 9/0 Ishant, Bumrah, Shami, Umesh – India’s four horseman of the apocalypse – READ ON: Perth Test is just the third time India have gone for an all-pace attack  First runs on the board courtesy Aaron Finch, who gets on top of a short one from Jasprit Bumrah and finds the gap to earn a boundary. Australia 5/0 in 2 overs

Aaron Finch and the Aussies are off the mark on the first morning!

The toss at the latest Test venue – the 10th in Australia. Here’s our toss report. Unchanged Australia bat in Perth; India draft in Umesh Yadav and Hanuma Vihari. This marks the third instance of an all-pace Indian team, after Johannesburg this year and Perth in 2011-12.

And we are underway – Ishant Sharma drags one down the legside – Marcus Harris on strike, Aaron Finch is the non-striker and that’s a maiden by the Delhi bowler. Feast your eyes on this folks!

This is India’s pace attack on the bounciest pitch (so the curator says) at the Optus Stadium, Perth – be wary, wary of this Indian bowling unit

Buoyed by a historic opening Test victory at Adelaide, a confident Indian side will look to extent their lead in the four-match series when the second Test against an under-pressure Australia gets underway at the new Optus Stadium in Perth – hosting its first Test ever – on Friday.

Both teams will have to make a quick turnaround for the Perth encounter coming three days after the Adelaide contest.

Australia, who showed great resolve to stage a fightback in the second dig falling short by 31 runs, were helped purely by the tail in the second essay – with Nathan Lyon, who picked up six wickets in the second innings – left unbeaten on 38.

Deep Dasgupta: Bowlers have carried faltering batsmen through the season 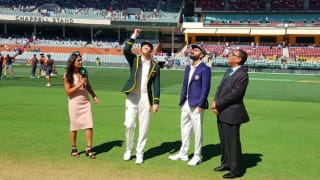