It’s unclear if Bancroft will make a Test comeback in time for the India series with debutant opener Marcus Harris registering a pair of 26 at Adelaide.

Australians were taken by surprise during their training session at the Optus Stadium in Perth on Wednesday two days ahead of the second Test against India when Cameron Bancroft, almost on the verge of completing his nine-month suspension period, dropped to interact with the team.

According to a report in the Sydney Morning Herald on Wednesday, Bancroft, whose term ends on December 29 when he will make a comeback playing for Perth Scorchers in a Big Bash League match against Hobart Hurricanes in Launceston, met captain Tim Paine as the pair chatted for several minutes.

It’s unclear if Bancroft will make a Test comeback in time for the India series with debutant opener Marcus Harris registering a pair of 26 at Adelaide.

“I assume there might be a bit of talk about it. I’m lucky that I’m in a position now that I’m in the side,” Harris said.

Banned batsman Cameron Bancroft having a chat to Aust captain Tim Paine at the WACA Ground. Bancroft set to make his comeback in #BBL08 at the end of December pic.twitter.com/zZITuo5MNK

“If I make runs that will probably look after itself, and if don’t it’ll probably come down to a bit of a competition with other blokes.”

Harris and Bancroft are good mates right from the time both were partners at Western Australia where Harris played before he moved on to Victoria.

“We were sort of opposites in personality,” Harris said.

“A yin and yang thing. Bangers is the most intense man in the world and I was a bit more chilled out, but it worked really well. I was really happy for him last year when he was playing in the Test side, I thought he started doing really well.

“We chat regularly … we’re really good mates. He said once he’s back he’s going to shave that beard off, so I’m looking forward to that. He seems in good spirits, so I’m hoping he goes really well.”

Harris was visibly furious after his second innings dismissal at Adelaide. He was livid with himself after he was drawn to drive the ball, but ended up edging it behind to Rishabh Pant.

“I felt like I got sucked in a little bit and that’s why I was talking about being strong enough to try to take a one rather than hit a shot that’s low percentage for what would probably still be a one anyway,” Harris said.

“That’s alright but something I’ve worked on and will have a plan going forward to work through as well.” 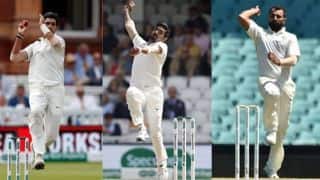