Mitchell Johnson says Jasprit Bumrah 'hardly' gives an opportunity to score runs forcing the batsmen to rethink before going for short against his bowling. "

While India captain Virat Kohli continues to hog the limelight, one of the major highlights for India’s men cricket team in 2018 was the emergence of its pace attack that has been rated as ‘world-class’.

On a consistent basis they have not only matched but sometimes outperformed their counterparts in overseas conditions. One of the biggest finds has been Bumrah who made his Test debut in January against South Africa and since then has become a vital cog in India’s bowling plans. On the current tour of Australia, the 25-year-old has continued to impress with the batsmen finding it hard to score against him.

Australia’s fast bowling great Mitchell Johnson says Bumrah ‘hardly’ gives an opportunity to score runs forcing the batsmen to rethink before going for short against his bowling. “He [Bumrah] has a unique action, but is very consistent with his line and length,” Johnson told The Times of India. “He hardly bowls a loose delivery, which means he is hard to score off and any batsman will think twice before taking him on. The pressure he creates at one end often leads to wickets tumbling at the other end.”

He continued “Ishant Sharma has been around for a while. He is hitting the bat hard, which is a good sign, but needs to be more consistent with his line. Mohammad Shami has a smooth action and has the ability to surprise batsmen with the occasional short ball. Umesh Yadav seems to have added a yard of pace but does not swing it much these days, but the bowler who impressed me most is Jasprit Bumrah. 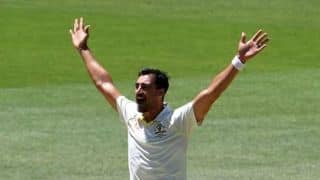