Both Zaheer Khan and Praveen Kumar also raved about the performance of India's pace attack which has helped the team take 40 wickets in the opening two Tests.

New Delhi: Virat Kohli should remain the way he is, said former team-mates Zaheer Khan and Praveen Kumar on Wednesday, staunchly defending the combative India captain, who has copped criticism from Australian legends for his on-field behaviour.

Allan Border, Mike Hussey, Mitchell Johnson and even India’s Sanjay Manjrekar has expressed their displeasure over Kohli’s on-field antics in the ongoing series Down Under.

“I would say (Virat) stick to what you know best. Stick to what has got you so much of success. You can’t move away from your success formula. It doesn’t matter what others are saying (about Kohli). Series in Australia have always been (intense) like this,” former pace spearhead Zaheer told PTI.

Ex-India pacer Kumar could not agree more with Zaheer. “Kohli played with aggression at the U-16, U-19 and Ranji Trophy level. What is the issue if he is showing the same aggression while playing for India? I have played a lot of cricket with him and I can safely say that he can’t play his best cricket without aggression,” said Kumar, a fine swing bowler in his heydays, during the launch of Ferit Cricket Bash.

Both Zaheer and Praveen also raved about the performance of India’s pace attack which has helped the team take 40 wickets in the opening two Tests.

“They have been spot on with the execution of their plans. Jasprit Bumrah has been providing that X factor, Mohammed Shami has been in great form, Ishant Sharma has used his experience very well, someone like Bhuvneshwar Kumar is waiting for his turn and Umesh Yadav has got heaps of potential.

“Even though Umesh has had a tough game in Perth, he has the ability to take two three quick wickets like Bumrah and Shami.”

Zaheer called the current attack as India’s best ever.

“I think as a unit, yes (they are the best ever) when you look at the four five fast bowlers on tour. In a long time, you can see the potential of each and every fast bowler including the bench strength,” he said.

One of India’s finest seamers, Zaheer said the visitors remain favourites to win the series despite being outplayed in the second Test.

“The fact that you won the first Test, it was never going to be easy after that. Australian team was actually on the backfoot after Adelaide but now the series is levelled. But before India departed for Australia, they were billed as favourites. They still are,” added Zaheer. 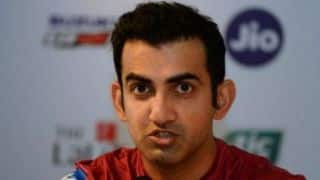