Australia's coach feels that neither team would know how the drop-in pitch plays in Test conditions until the match begins.

The Australia coach Justin Langer said Wednesday he expected a pacey wicket at the new Optus Stadium for the second Test against India and declared “pretty boy” captain Tim Paine “ready to go” despite injury.

Australia are looking to avenge a 31-run defeat in Adelaide  to level the four-Test series but Langer admitted there was some uncertainty over the surface in Perth. The Test will be the first played at the new stadium and Langer said it appeared the wicket was similar to the fast track which made its predecessor, the WACA, a haven for pace bowlers.

“I’m really fascinated and can’t wait to see what the wicket brings,” he told reporters. “There’s only been one four-day game in its history. I went and watched a bit of the NSW versus WA game — there was certainly some pace and bounce there. We’ve also seen some pace and bounce in it during the one-dayers and T20 game.”

But he said neither team would know how the drop-in pitch plays in Test conditions until the match begins on Friday.

“Time will tell what the wicket brings… If we can get (WACA-style pace and bounce) it’d be a great thing for Test cricket,” Langer said.

Langer also scoffed at suggestions skipper Paine could miss the Test after a delivery in Adelaide smashed into a right finger that has required several operations in the past.

“Paine is the toughest pretty boy I’ve seen in my life,” he said. “Even if it was snapped in about four places he’d still be right. He’s absolutely fine. He’s obviously had issues with it before but he’s 100 percent ready to go.”

India’s win was their first in Australia in a decade, and their first ever in the opening Test as they search for a maiden series win Down Under. 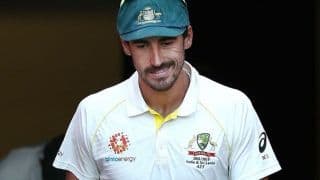 Australia should contemplate dropping Mitchell Starc if he’s not up to scratch in Perth: Mark Waugh