Ravindra Jadeja's fitness issue came up as a surprise as he was included in the 13-man squad for the second Test in Perth.

India coach Ravi Shastri on Sunday revealed that senior spinner Ravindra Jadeja had been suffering from stiff shoulder from the time he was playing Ranji Trophy and was given injections four days after landing in Australia.

Jadeja’s fitness issue came up as a surprise as he was included in the 13-man squad for the second Test in Perth.

And he fielded for a major part of the two Australian innings as well, thus posing questions about Indian team’s injury management programme.

“Problem with Jadeja was that he had taken an injection four days after coming to Australia because of some stiffness in his shoulder,” Shastri said during a media conference.

“It has taken a while for that injection to settle down. He had some stiffness when he was in India as well but he did play domestic cricket after that. Then he felt the same on coming here to Australia and he was injected,” Shastri replied but it did raise questions if the player travelled Down Under without being hundred percent fit.

Shastri admitted that Jadeja’s recovery has taken more time than expected. “It (Jadeja’s recovery) has taken longer than we expected and we wanted to be careful. Last thing you want is someone breaking down after 5-10 overs and then we would be stuck for players to pick for Melbourne and Sydney.

“So, looking back at Perth, we felt he was 70-80 per cent fit and we didn’t want to risk him in the second Test. If he is 80 per cent fit here (Melbourne), he will play,” said Shastri.

Fitness is a big concern, Shastri said. Rohit Sharma has recovered from his back injury and was back in the nets while Ashwin will be monitored during the next 48 hours.

“Fitness (is the biggest concern). We will have to evaluate fitness in the next 24-hour period, take it one step at a time and also consider the conditions. We will evaluate Ashwin over the next 48 hours.

“Rohit Sharma looks good and has made a very good improvement but we will see how he pulls up tomorrow. He looks good as of today. Hardik Pandya is fit,” said the head coach.

Shastri however didn’t want to divulge if Hardik Pandya will come into the playing XI as he has played only one first-class match (against Mumbai) after his comeback.

“Pandya coming here gives you an option (of playing five bowlers) but he has not played much first-class cricket. He has just played one game after injury so we have to be very careful before we actually decide whether he plays or not,” he added. 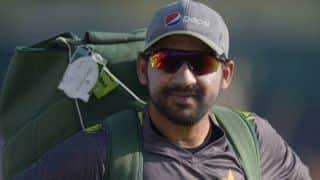