Perth: Nathan Lyon dismantled India s tail on Sunday with the last three wickets falling for 31 runs to claim his 14th five-wicket haul in Test cricket as Australia took a 43-run lead in the first innings.

The offspinner, who now has 331 Test scalps, has drawn equal with Sri Lanka legend Muttiah Muralitharan s record against India, after the 31-year-old claimed figures of 5/61 in his 34.5 overs. Lyon and Muralitharan now have seven five-wicket hauls against India in Test cricket.

“He has got terrific variations and uses the pace and bounce from the pitch to extract maximum value.”

Australia have got a very special spinner in @NathLyon421. He has got terrific variations and uses the pace and bounce from the pitch to extract maximum value. #INDvAUS

After hearing of Tendulkar s tweet, Lyon was chuffed. “That’s amazing to get something like that from Sachin Tendulkar,” Lyon was quoted as saying by cricket.com.au after the day s play.

“He’s obviously one of the greatest of all time to ever play the game. So, to get recognised from him it’s a massive honour.”

Lyon said that still has a lot left in the tank. “To pass the great ‘White Lightning’ it’s pretty special. Those types of milestones for me personally haven’t really sunk in. I don’t think I’m at the top of my game yet, he said.

“I think I’ve still got a lot of improvement, a lot of learning about the game and about off-spin bowling. I believe there’s a lot around the corner for me if I keep working hard and keep wanting to get better.

“At the end of my career I’ll sit down with my family and friends and hopefully have a beer with mum and dad and my brother and everyone else and just go ‘OK, that’s where we got to, that’s pretty special’. But I’ve got a lot to achieve in my eyes.” 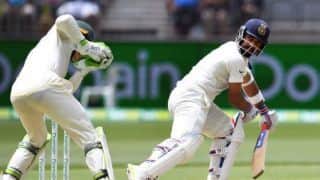