Kohli s immaculate knock was brought to an end by Pat Cummins, after he scored 123 off 257 balls, carting 13 boundaries and one six in his innings.

Perth: Virat Kohli smashed his 25th Test century on Sunday during Day Three of the second Test against Australia at Perth s new Optus Stadium. With the century his sixth Test ton in Australia Kohli also equalled Sachin Tendulkar s record for the most number of centuries registered by an Indian Down Under.

Kohli entered the crease at a precarious situation after the tourists lost both their openers — KL Rahul (2) and Murali Vijay (0) with just eight on the board. Resuming from his overnight score of 82 on a tough wicket that had quite a lot of bounce, Kohli reached his hundred in 214 deliveries playing a classic drive off Mitchell Starc.

On reaching the three-figure mark, Kohli, who became the fastest to score 1000 Test runs for India in Australia a feat he achieved at Adelaide removed his helmet and placed it on the green turf and then pointed at his bat which suggested that he lets his bat do most of the talking.

There it is! The King @imVkohli brings up a brilliant hundred in Perth! #India #Kohli #ViratKohli #Cricket

Kohli s immaculate knock was brought to an end by Pat Cummins, after he scored 123 off 257 balls, carting 13 boundaries and one six in his innings. In the final delivery of the 93rd over, Kohli, who was looking to drive, edged it to Peter Handscomb at second slip. However, footage showed that the catch was not cleanly taken.

The on-field umpires — Kumar Dharmasena and Chris Gaffaney referred the decision upstairs and gave the soft signal as out . With no conclusive evidence to overturn the on-field decision, the TV umpire Nigel Llong had to go ahead with the decision.

Kohli is now the 11th batsman to complete 1000 Test runs in a calendar year overseas and the third Indian to achieve the mark after Rahul Dravid (1137 runs in 18 innings in 2002) and Mohinder Amarnath (1065 runs in 16 innings in 1983). He is also the first Indian skipper to breach the milestone and the third overall captain after Australia s Bob Simpson and South Africa s Graeme Smith. 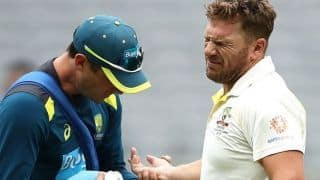