Kedar Jadhav starred with the bat and ball and helped India beat Australia in the first ODI in Hyderabad.

81 unbeaten runs with the bat and a wicket with the ball. Kedar Jadhav once again highlighted what he, when fit, can bring to the table as India took 1-0 lead in the five-match ODI series, beating Australia in the first ODI in Hyderabad on Saturday. (ALSO READ: Bowlers won us the game: Virat Kohli)

While India contained Australia to 236 bowling first, they managed to get past the Australian despite an early stutter in the chase having lost the likes of Shikhar Dhawan, Rohit Sharma, Virat Kohli and Ambati Rayudu with over 100 runs still to be scored to cross the finish line.

Although like many other occasions MS Dhoni was in the middle to hit the winning runs and take the team through, Kedar emerged as India s leading run-getter in this game as the hometeam won the game by six wickets. (AS IT HAPPENED: INDIA vs AUSTRALIA, 1st ODI)

Kedar, who was involved in one such partnership with Dhoni against the same opponent a month ago, said that he tried to learn from Dhoni and Kohli, who he felt are the best chasers in the game.

Recently in Australia, we pulled off a similar kind of a chase. I had that in the back of my mind. When you have Mahi bhai at the other end, you just have to listen to him. I just did that again today. I tried to learn a lot from him (Dhoni). MS and Cheeku (Kohli) are the best chasers in the game, I feel, said Kedar after winning the Man of the Match award for his performance.

The intensity has to be there all the time. That’s what we learn from the captain and that’s what we tried to do. I would have tried to play more shots early had Dhoni bhai not been there. That’s what he does, he tells you exactly. He reads your mind; plenty of times when you feel this ball can be hit for boundaries, he’ll tell you ‘I can see that but the team needs more solidity and you have to bat till the end’.Every time you think of the team, most of the times, you’ll cross the line and end up on the winning side,” added Kedar. (FULL SCORECARD: INDIA vs AUSTRALIA, 1st ODI)

Kedar,who along with Vijay Shankar, completed the 10-over quota of the fifth bowler, returned with the figures of 1/31 from his seven overs. Kedar, who dismissed a well-set Marcus Stoinis and broke the 86-run stand between him and Usnam Khawaja, highlighted how he goes about his bowling. (ALSO READ: Kedhar Jadhav, MS Dhoni steer India to 1-0 series lead)

“My bowling is all about reading batsmen’s mind. I have two or three options with the angle. I tried to bowl stump-to-stump,” said Kedar.

“Best part about my bowling is, I don’t think like I’m a bowler, there’s no extra responsibility. I enjoy my bowling,” he concluded. 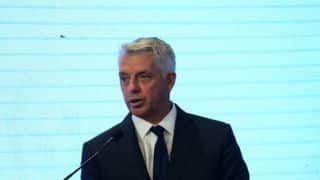