India captain Virat Kohli is satisfied with the way his team is shaping up two months ahead of the ICC World Cup 2019 that gets underway from May 30 in England. (READ: I’ve focused on my line and length – Shami)

On Saturday, India defeated Australia in a tense chase by six wickets to take a 1-0 lead in the five-match series.

An impressive bowling performance, led by pacer Mohammed Shami, saw India restricting the tourists to 236/7 at the Rajiv Gandhi International Stadium in Hyderabad.

India were then reduced to 99/4 before an unbroken 141-run partnership between Kedar Jadhav (81*) and MS Dhoni (59*) shifted the momentum and took the hosts over the line with 10 deliveries to spare.

Kohli acknowledged the chase was a bit difficult and praised the pair of Jadhav and Dhoni.

“It was a difficult sort of a game,” he said at the post-match presentation. “We did a good job with the ball. think the bowling won us the game although we wanted to get a partnership going. The wicket didn’t offer as much as it did under the lights, which was surprising. You have experience with MS [Dhoni] and flair with Kedar who is also experienced now. That partnership between them was outstanding and it was more or less a complete performance. That set the platform.”

He added, “At 99/3, I was speaking to Ravi [Shastri] bhai, and I said this is good. These guys have to do it and they have to get us across the line. The way Kedar and MS took responsibility, it was great to see.”

Shami, Kuldeep Yadav and Jasprit Bumrah picked up two wickets each. However, Shami stood out with his bowling figures of 2/44 from 10 overs that included the important wicket of in-form Glenn Maxwell (40) whose off-stump was uprooted by the pacer.

“The way Shami has come back into the white-ball set-up after his Test performances, have never seen him so lean before. He has lost 5-6 kgs. He’s running in and bowling so well. The lines and length he’s bowling; got Maxi [Glenn Maxwell] on 40-odd out with a beautiful ball. He has wicket-taking ability and he’s hungry for wickets. Heading into the World Cup, it’s a great sign for team India. If he can stay hungry like this and look for wickets and he has the ability to back it up with Bumrah and Kuldeep, it’s gonna be great to stand in the field and watch,” Kohli said.

The second ODI of the series will be played on March 5 in Nagpur. 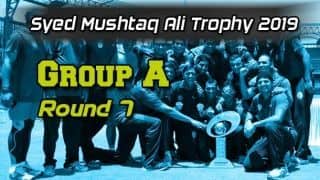 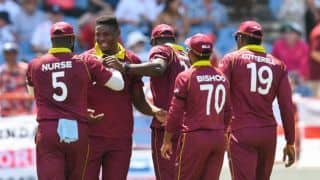