1st ODI: Last chance for India to iron out kinks before World Cup
By CricketCountry Staff

India and Australia meet in the first of five ODIs starting Saturday in Hyderabad, with the focus being the 2019 ICC Cricket World Cup.

These five ODIs are India s last chance before the World Cup starts May 30 to iron out any kinks. After losing both T20Is to Australia, India will be stung and ready for a further resurgence from a team that has not won an ODI series for over two years.

Virat Kohli‘s team needs to figure out their World Cup middle order, and so getting the likes of KL Rahul, Rishabh Pant and Vijay Shankar playing time in this series is vital. (VIDEO: India, Australia face off in ODIs with eye on World Cup)

Australia, ranked sixth in ODIs, are defending World Cup champions and need to find a way to gain confidence before the tournament. Hampered by injuries to Mitchell Starc, Josh Hazlewood and Kane Richardson and the woeful form of skipper Aaron Finch, can the visiting team channel their T20I success into the ODIs?

Australia’s coach Justin Langer has backed Finch – who will play his 100th ODI – to soon find form again after recent lean spell was extended in the T20I series win. Australia have five more ODIs against Pakistan after this tour, and with Steven Smith and David Warner’s one-year bans ending before the last two games of that series next month, the team combinations will prove a talking point. (READ: Aaron Finch’s 100th ODI: His five best innings)

What: India vs Australia, 1st ODI

It is tough to see Rahul slotting in, unless one of Shikhar Dhawan is rested. Ambati Rayudu has been identified as India’s No 4 and the No 6 spot should in all probability go to Kedar Jadhav, which would keep Pant on the bench.

With Hardik Pandya ruled out with injury, Shankar gets another chance to stake a claim for a spot in India’s World Cup squad. It could be a toss-up between him and Ravindra Jadeja in the XI, but given that Shankar was named in the ODI squad as a first-choice pick he should get the nod.

Australia on Friday confirmed Alex Carey will play in the series opener but it’s not clear whether he will open the innings or bat lower down the order. Aaron Finch says that going forward, the wicketkeeper-batsman will likely bat in the lower middle order. Shaun Marsh will miss the Hyderabad fixture having landed early on Friday morning and D’Arcy Short, the standby player in the ODI squad, should replace him.

With Kane Richardson ruled out of the series, Jhye Richardson should slot in ahead of Nathan Coulter-Nile. Nathan Lyon looks the lead spinner. Also, Glenn Maxwell’s demand of promotion has been accepted with Finch hinting the big-hitter will ‘no doubt’ bat higher.

The Rajiv Gandhi Stadium has a reputation of being very batting-friendly. In five ODIs at Uppal, 300 has been scored thrice. The last time Australia played there, they scored 350/4 and won by three runs.

The forecast is for partly cloudy skies with a high of 33 degrees.

Finch has gone 19 limited-overs innings for Australia without scoring a half-century.

“For us to win (in Bangalore) is a great performance for us in T20 cricket now it’s time to extend that to one-day cricket and pick the best team we’ve got.” – Justin Langer 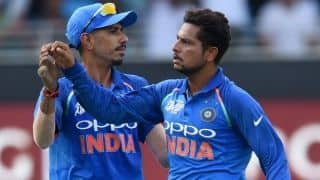