With 20 T20I fiftY-plus against their name, Kohli and Rohit now top the list of batsmen with most number of 50+ scores.

It rained sixes at the M Chinnaswamy Stadium with the local boy KL Rahul and another Indian Premier League (IPL) local boy and India skipper Virat Kohli took on the Australian bowlers in the second Twenty20 international on Wednesday.

Kohli, meanwhile, equalled Rohit Sharma s record of most fifty-plus scores (20) in T20Is as he notched up his 20th fifty in the shortest format of the game. (India vs Australia, 2nd T20I: FOLLOW LIVE UPDATES)

Kohli, who was playing his 67th T20I, achieved this feat having played 27 T20Is less than Rohit, who was played 94 matches.

Kohli, on his way to the 20th T20I fifty, also surpassed Martin Guptill’s run tally of 2272 and became the second highest run-getter in T20Is, The list is topped by Rohit, who was rested for India’s final T20I international before the 2019 ICC Cricket World Cup. (ALSO READ: Virat Kohli levels with Shoaib Malik at third spot in all-time T20I run list)

Players with most number of fifty-plus scores in T20Is: 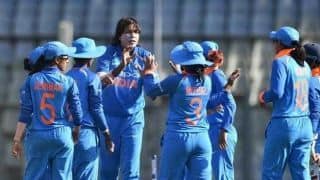 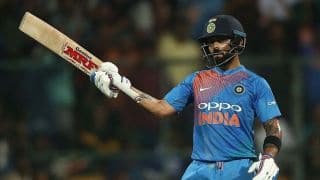