Kohli had smashed back-to-back boundaries off Zampa in the 38th over before the leggie crashed his woodwork as the Indian captain departed for 123.

Legspinner Adam Zampa claimed the prized wicket of Virat Kohli to turn the tide in Australia s favour that ultimately changed their fortunes as the tourists romped to a 32-run victory against India in the third one-day international at the JSCA Stadium at Ranchi on Friday. (India vs Australia, 3rd ODI: SCORECARD)

Zampa, who picked three wickets MS Dhoni and Kedar Jadhav being the other two returned with figures of three for 70 in his 10 overs.

In the last one year, Kohli has been dismissed by leg-spin in ODIs five times off 193 balls. He fell to England s Adil Rashid twice in a series last year and now Zampa has picked him up twice. (ALSO READ: Virat Kohli surpasses Rahul Dravid to become India’s third-highest ODI run-getter)

We bowled well collectively. The quicks upfront were amazing, Virat is a serious player, it was good to take his wicket when we did. I don’t think he’s my bunny, he’s one of the hardest players to bowl to, Zampa said at the post-match presentation.

Kohli had smashed back-to-back boundaries off Zampa in the 38th over before the leggie crashed his woodwork. I was under a bit of pressure, if he had hit a couple of more boundaries, the momentum would have shifted towards them, he said. (ALSO READ: Ball-tracking under scrutiny after Aaron Finch s lbw dismissal)

Elaborating on the mindset of the Australian bowling attack, Zampa said: The message from the management and the coach was to take wickets, the mindset was the same. The wickets here in India are pretty good and the outfield fast, that has a say in your bowling. 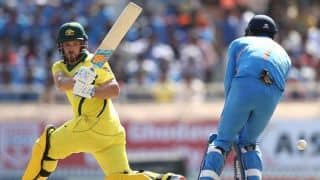