If Rohit scores two hundreds, he will equal Tendulkar’s tally of nine hundreds in India versus Australia ODIs.

While India will be out to win their final ODI series before the 2019 ICC Cricket World Cup as they gear up to face Australia in the five-match series, beginning on Saturday, Rohit Sharma will be in with a chance to surpass Ricky Ponting and Sachin Tendulkar. (ALSO READ: 1st ODI: India’s World Cup fine-tuning gets underway in Hyderabad)

The Indian team vice-captain in the limited-overs cricket needs 386 runs more to surpass the former Australian skipper and secure the second spot in the list of most runs in the India-Australia ODIs.

While Ponting with 2164 runs in 59 India versus Australia ODIs occupies the second spot, Tendulkar tops the list with 3077 runs in 71 ODIs. (ALSO READ: No plans to shift any of the India-Australia matches: CK Khanna)

Rohit, who has thus far played 31 ODIs against Australia, has 1778 runs against his name and is on the third spot in the list while Adam Gilchrist is on the fourth spot with 1622 runs in 46 matches. MS Dhoni is on the fifth spot with 1548 runs in 51 ODIs.

Most runs in India versus Australia ODIs:

While Matthew Hayden is occupying the sixth position in the list with 1450 runs in 28 matches against his name, the current Indian cricket team skipper Virat Kohli is occupying the seventh spot, having scored 1335 runs in 31 games. (ALSO READ: The key issues for India in last lap of ODIs)

Rohit will also have a chance to go past Tendulkar and top the list of batsmen with most hundreds in the India versus Australia ODIs. Tendulkar, in 71 ODIs, scored nine hundreds while Rohit in 31 games has seven hundreds against his name, including a double hundred and is currently occupying the second spot in the list. Kohli and Ponting have scored six hundreds each in the India-Australia ODIs.

If he scores two hundreds, he will equal Tendulkar’s tally of nine hundreds and one more hundred will take him past Tendulkar.

Most hundreds in India versus Australia ODIs:

The five-match India-Australia series kicks off on Saturday in Hyderabad while Nagpur, Ranchi, Mohali and Delhi will host the following four ODIs of the series. 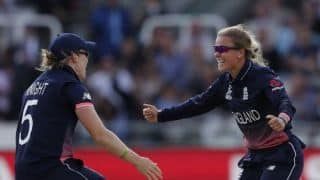