These five ODIs are India's last chance before the World Cup to lock in their combinations.

The 2019 ICC Cricket World Cup starts in less than three months. India play five ODIs before that, all against Australia, with the series starting on Saturday.

Barring New Zealand – who ended their pre-World Cup ODI campaign with a 3-0 win over Bangladesh recently – and India, each other team at this summer’s mega event will be playing ODIs after the culmination of this five-match series. That leaves these five ODIs as critical for India to iron out kinks and get a clearer picture of what their ideal World Cup XI should be come June 5 when they meet South Africa at Southampton. (READ: Is this India s final World Cup squad?)

The deadline for submitting World Cup squads is April 23. India’s current ODI squad, with the exception of Siddarth Kaul who will make way for Bhuvneshwar Kumar for the last three matches against Australia, is what the BCCI selectors are likely to send to England. With, of course, the return of Hardik Pandya who is currently sidelined with injury. (VIDEO: India, Australia face off in ODIs with eye on World Cup)

So what are the areas of focus? Let’s delve into it.

KL Rahul, after a terrible Test run, showed the selectors enough reason to bring him back with 89 and 81 in two four-day games for India A against England Lions as well as 42 in a one-day fixture. He slotted straight into India’s XI for the two T20Is versus Australia, with Shikhar Dhawan and Rohit Sharma each sitting out a game, and scored 50 off 36 balls and 47 from 26. Further proof that the management has Rahul in mind as the third opener for the World Cup.

However, Rahul’s chances of playing are dependent on one of Rohit and Dhawan get injured or are rest, or if Ambati Rayudu suddenly loses his form at No 4. MS Dhoni is locked at No 5 and Kedar Jadhav and Rishabh Pant are the options at No 6. So where do India play Rahul in these ODIs if they want to give him more playing time?

Plenty should be revealed on Saturday in Bangalore. (READ: Is this the best Indian batting order for the World Cup?)

Before Mohammed Shami emerged as a viable source of wickets up front and at the death in Australia and New Zealand this year, India used Bhuvneshwar and Jasprit Bumrah as the pace spearheads, with Umesh Yadav, Khaleel Ahmed, Kaul, Deepak Chahar, Umesh Yadav and Mohammed Siraj making fleeting appearances. With Bumrah rested for the Australia and New Zealand ODIs, Shami grabbed his chance with both hands and this year has 14 wickets from seven ODIs at an average of 20.64 and economy rate of 4.92. (READ: World Cup 2019: What should India’s bowling attack be?)

Not only has be proven mighty important for India in successive series wins, he has pitchforked himself into World Cup reckoning and pushed the left-armer Khaleel out of the ODI squad. He could, with success against Australia, even nudge out Bhuvneshwar from India’s World Cup starting XI.

Bhuvneshwar is not in the squad for the first two games against Australia, which means that Bumrah and Shami will take the new ball. Kaul is Bhuvneshwar’s replacement and is unlikely to play, with the legspinners Kuldeep Yadav and Yuzvendra Chahal fixtures and Vijay Shankar the seam-bowling allrounder.

The allrounder for England

With Pandya injured, Shankar’s chances of going to the World Cup have increased and these ODIs are obviously massive for him. Shankar, 28, made his ODI debut in Australia last month and batted just once, getting a chance at No 5 in an ODI in New Zealand from where he scored a good-looking 45 off 64 balls an innings which in his words changed his India career. Shankar, a seam-bowling allrounder, has bowled 16 overs in four ODIs without a wicket.

The selectors could view Shankar as a specialist batsman for the Australia series and the World Cup. He batted at No 3 twice and No 4 once in the T2oIs in New Zealand, scoring 84 runs at a strike-rate of 153.57. Also, given Jadhav s fitness history, the management may also be looking at Shankar as someone to cover in the lower order as well as bowl a few overs.

Rayudu has the backing of the captain and coach for the No 4 spot in India’s ODI team for the World Cup. With 190 runs in the 4-1 win in New Zealand, he did enough. India dropped Dinesh Karthik for this series and added Pant, which indicates strongly that the latter will be the reserve wicketkeeper for the World Cup.

Pant has played just three ODIs, all against West Indies in India last year, and has been in and out of India s T20I squad. He played all three T20Is in New Zealand last month, scoring 4, 40* and 28 as a specialist batsman, and now in the 0-2 loss to Australia he made 3 and 1.

Where does that leave him in regards to an ODI berth?

Pant has not convinced in T20Is or ODIs with his batting, and with Rayudu, Dhoni and Jadhav forming India’s middle order core – with one of Pandya and Shankar at No 7 – it is tough to see where he fits in. India would ideally want to get Pant some games now to see where he’s at. But would resting the first-choice players make sense?

India do it often, but this is their last series before the World Cup. Jadhav is injury prone and Dhoni can be sluggish, so it is likely that the team has Pant in mind for a quick-scoring middle-order role. If given a chance, Pant will need to deliver. 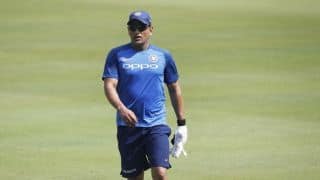 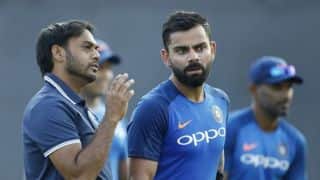