Australia captain Aaron Finch has lavished high praises on his India counterpart Virat Kohli calling him the greatest ODI player of all time.

Australia captain Aaron Finch has lavished high praises on his India counterpart Virat Kohli calling him the greatest ODI player of all time. (READ: The key issues for India in last lap of ODIs)

He will be one of the biggest threats for Australia in the upcoming five-match ODI series that gets underway from Saturday in Hyderabad and Finch reckons dismissing him early will be the key.

“I think everyone’s tried everything [against Kohli]. He’s the greatest one-day player of all time. His record speaks for itself. It’s unbelievable. You have to get him early, it’s as simple as that. If he gives you half a chance you have to take it otherwise once he gets in he’s so dominating and tough to get out,” Finch said on Friday.

Finch reckons that the first 10-15 balls that Kohli faces will be the key and they need to be quite disciplined when dealing with him.

“We’ve seen in the past we’ve had some success against him. He’s had a lot of success against us as well. It’s about being as disciplined as you can, for as long as you can. If you let him dictate and get away early, it can be hard to catch up. You just have to be as good as you can early, especially his first 10-15 balls, really challenge his defence. And you need a bit of luck at times too, no doubt. He’s an unbelievable player,” he said. 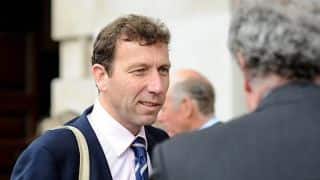 Balance between bat and ball in ODIs is a concern: Mike Atherton