The visitors went 1-0 in the four-Test series after a tense, 31-run win in Adelaide earlier this week-- their first victory in Australia in a decade.

India skipper Virat Kohli was undaunted Thursday despite losing prolific spinner Ravichandran Ashwin and batsman Rohit Sharma to injury as he looks to twist the knife in the second Test against Australia.

The visitors went 1-0 in the four-Test series after a tense, 31-run win in Adelaide earlier this week — their first victory in Australia in a decade.

But India, who are searching for their first series win in Australia, suffered a setback when Ashwin and the experienced Sharma were declared unavailable for the second Test in Perth, starting Friday.

Ashwin is receiving treatment for a left-sided abdominal strain, while Sharma jarred his back while fielding in Adelaide, the Board of Control for Cricket in India said.

Also missing, as expected, will be exciting young opener Prithvi Shaw, who suffering ligament damage in a warm-up match ahead of the Adelaide Test. The BCCI said Shaw, 19, was “recovering well” but was still undergoing treatment.

ALSO READ: With Ashwin, Rohit ruled out, what could be India’s Playing XI in the Perth Test?

However, Kohli was bullish about India’s prospects in the inaugural Test at the new Perth Stadium, which has replaced the city’s venerable WACA Ground as its premier cricket venue.

“We are definitely confident of the percentage of chances we have and we want to build on that,” said Kohli at a pre-match press conference before the injury problems were announced.

“Obviously Australia is going to be a strong team in their home conditions and on a wicket like Perth, which probably offers you more than most other pitches in Australia. But we have an equal chance.”

Ashwin took six wickets in the first Test, while Sharma hit scores of 37 and one. They were the notable absences in India’s initial 13-man squad.

All-rounder Hanuma Vihari is expected to slot in for Sharma, with the final spot a toss-up between pacemen Bhuvneshwar Kumar and Umesh Yadav or Ravindra Jadeja, who has taken 185 Test wickets with his left-arm spin and also averages 32.44 with the bat. 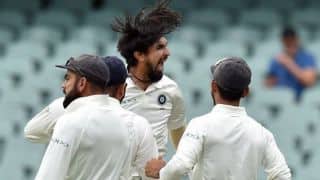