India need five wickets to beat Australia after reducing them to 138/5 at tea on day four at the MCG after setting a target of 399 in just under six sessions.

India need five wickets to beat Australia after reducing them to 138/5 at tea on day four at the MCG after setting a target of 399 in just under six sessions.

Australia lost three wickets in the second session after Australia lost both their openers before lunch for 44 runs. Mohammad Shami removed Usman Khawaja post-lunch while Mitchell Marsh was undone by Ravindra Jadeja. but the big wicket of Shaun Marsh (44) was taken by Jasprit Bumrah. (FULL SCORECARD: INDIA vs AUSTRALIA, MCG TEST)

Marsh and Khawaja had started the second session on a steady adding 30 runs for the third wicket before Shami bowled a peach of a delivery trapping Khawaja in front for 33.

Travis Head and Shaun Marsh then got together and the duo batted well without getting bogged down adding 51 runs in 12.1 overs before Bumrah got one to nip back in from around the wicket and Marsh was beaten for pace and was trapped in front. Umpire Marius Erasmus raised his finger and reviews showed the ball’s impact on the leg stump was umpire’s call and Marsh on his way out.

Six overs later, younger brother Mitchell drove Jadeja only managing the to hit the ball at covers to Virat Kohli as Australia slumped to 135/5. At tea, skipper Tim Paine joined Head in the middle taking their team to 138/5, still adrift of the target by 261 runs.

Earlier, Bumrah extended Aaron Finch s struggles to add a seventh wicket in the Test, and shortly before the lunch break Jadeja struck to get Marcus Harris.

Under somewhat gloomy skies, India added 53 runs to their total for the loss of three wickets. The dismissal of Rishabh Pant, trying to uppercut Josh Hazlewood, prompted the declaration from Virat Kohli with India 106/6, a lead of 398. From the sidelines, Kohli immediately stood up and beckoned his batsmen back as he headed up the MCG stairs to the dressing room.

Pant was the third wicket to fall on Saturday morning as Pat Cummins surged to career-best Test figures of 6/27. Mayank Agarwal struck two flowing sixes down the ground off Nathan Lyon to move to 42 before he became Cummins fifth wicket, bowled when getting an inside edge to a ball that stayed low. Cummins had his sixth when Jadeja spooned a catch to point where Usman Khawaja swooped in, and then Pant s attempted waft at Hazlewood was pouched by Tim Paine.

Bumrah struck second ball when Aaron Finch arched his back and steered straight to Kohli at second slip who cupped a sharp catch above his head. Bumrah nearly had Usman Khawaja too, when the left-hander flicked to Agarwal at ankle height at short leg but the ball didn t stick. 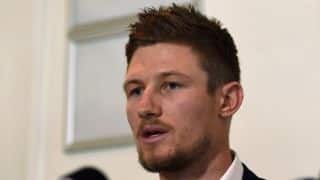