Jadeja's shoulder has shown progress and is getting better with each day, which makes him available for the third Test of the series.

India allrounder Ravindra Jadeja, whose fitness was under scanner following coach Ravi Shastri’s comments that he flew to Australia not 100 percent fit, is now available for selection for India’s Boxing Day Test against Australia at the Melbourne Cricket Ground.

The BCCI, in a release, stated that Jadeja complained of a discomfort in his left shoulder during the practice game against Cricket Australia XI in Sydney on November 30. But having received an injection, coupled with proper rehabilitation, Jadeja’s shoulder has shown progress and is getting better with each day, which makes him available for the third Test of the series. The Board also mentioned Jadeja’s injury as the reason behind his non-inclusion for the second Test at Perth.

It is to be noted that Jadeja first felt the discomfort during the ODIs against West Indies at home and had received an injection back then as well which helped him recover and play a Ranji Trophy tie for Saurashtra, where he bowled 64 overs without any complain.

Jadeja was not included in India’s Playing XI for the second Test at Perth despite their frontline spinner R Ashwin being ruled out. But while the Indian team management continuously stressed on not requiring the services of the allrounder based on the condition of the pitch, it is now clear as to why Jadeja was left out.

Earlier today, Shastri revealed that Jadeja had been suffering from a stiff shoulder from the time he was playing Ranji Trophy and was given injections four days after landing in Australia. However, with R Ashwin still uncertain, Jadeja seems likely to grab a place in India’s Playing XI at the MCG. 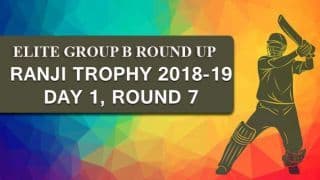