India are favourites, but there is always a danger lurking with a confident Bangladesh team.

Melbourne: Having remained unbeaten so far in the ICC Cricket World Cup 2015, India face Bangladesh in the quarter-final at the Melbourne Cricket Ground (MCG) on Thursday. India have had a fantastic time in Group B, having won all their six games, making their way to the quarters by topping the group. On the other hand, Bangladesh got past England and a few other victories helped them qualify for their first ever knockouts in the World Cup. READ: India must guard against complacency moving ahead in ICC Cricket World Cup 2015

While India are the favourites for this game from the outset, given their undoubted superior strength, they would be wary of the giant-killers Bangladesh. Skipper MS Dhoni is the lone survivor in the Indian team from the defeat to Bangladesh in the 2007 World Cup. Bangladesh have four survivors — Mashrafe Mortaza, Shakib Al Hasan, Tamim Iqbal and Mushfiqur Rahim — who were star performers in that game. While there is a lot of talk about that game and Bangladesh’s victory in the Asia Cup 2012, this is a different setting and history wouldn’t have a bearing as such. READ: IND vs BAN, ICC World Cup 2015 Quarter-final : Shakib offered repetitive questions

Suresh Raina, the Indian batsman, said that they will back their strengths and focus on the job at hand. At the pre-match press conference, he said, “They’ve reached into the quarterfinal and now they’re playing against India, and they’ve played a lot of matches against us and have won against us also, so we just need to be positive and just come to look to enjoy each and every bowl.” India would thus bank on their batsmen to put up a good score. They have Rohit Sharma, Shikhar Dhawan, Virat Kohli, Raina and Ajinkya Rahane to do the job. On the other hand, Dhoni is also back amongst the runs. After the last game, the Indian team looks in much better shape as all departments have been tested. READ: Indian turn-up for optional practice ahead of quarter-final against Bangladesh

Moving from the small Eden Park playing surface to the large MCG, India’s spinners will feel a lot better. Ravichandran Ashwin and Ravindra Jadeja will be helped by the fact that the boundaries would be back, which would help them challenge the batsmen to go over the top. They had delivered a good performance against South Africa, which would hold them in good stead. There may be a chance of some part-timers also bowlers. Raina had a long bowling session in the nets on the eve of the game. The fast bowlers — Umesh Yadav, Mohammed Shami and Mohit Sharma — continue to be the in-form department and need to carry on the good work. READ: Shakib Al Hasan treating ICC Cricket World Cup 2015 quarter-final vs India as ‘just another game’

On paper, India are stronger than Bangladesh, but the latter back themselves to do well. Shakib Al Hasan, their star all-rounder, said that they need to play fearless cricket in order to beat India. “We played fearless cricket (in 2007 and 2012). We all want to play that brand of cricket that we did. So far in this World Cup we’ve been doing it. If we do exactly what we did against England and New Zealand, I think we’ll have a very good game,” Shakib said a couple of days before the game. READ: Shakib Al Hasan: Bangladesh are up for World Cup 2015 quarter-final against India

The bowlers would be the key for Bangladesh as they have made a difference to their cause. Shakib himself is a main cog in that unit with his left-arm spin and would be helped by Taijul Islam. But, it is the pace attack that has been in focus. Rubel Hossain has had an impressive tournament, while Taskin Ahmed continues to grow in reputation. Mashrafe remains the spearhead. Raina recognised the strength of their bowling attack and said India need to be positive. READ: India have to be wary of Bangladesh’s strengths

On the batting side of things, Mahmudullah has been their best batsman in this tournament with his two consecutive centuries. Mushfiqur and Shakib also need to fire as they have troubled India in the past. In Soumya Sarkar, they have a young batsman at the top, who plays fearless cricket. Tamim Iqbal and Imrul Kayes need to join the party and set a platform for those to follow. Know More: India vs Bangladesh ICC Cricket World Cup 2015 Quarter Final 2 at Melbourne

The pitch at the MCG looked a batting beauty on the eve of the game and seems to have runs on offer. At the end of the training session, skipper Dhoni walked up to the wicket and had a close look at it. Wonder what he was thinking. If you win the toss, bat first and put up a big score. That should be the key to win. India are the favourites, but there is always a danger lurking when the Bangladesh team is confident. READ:  Shakib Al Hasan wants Mahmudullah to continue form against India in ICC World Cup

Sri Lanka vs South Africa in past World Cup encounters 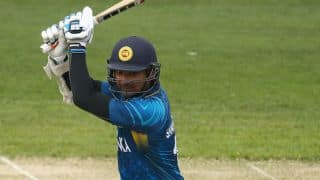