Bayliss said the only problem he and Joe Root faced in handling Curran was preventing him getting frustrated when not directly involved in the action.

England coach Trevor Bayliss believes Sam Curran’s competitive attitude will serve him well as the allrounder looks to build on his first-Test heroics against India.

Still only 20, Curran starred with both bat and ball as England celebrated their 1,000th Test with a 31-run win at Edgbaston, taking 4/74 in India’s first innings and hitting a maiden Test fifty to rescue the hosts from the depths of 87/7 in their second innings.

READ: How much will England miss Ben Stokes at Lord’s?

It was a hugely impressive display by a man playing just his second match at this level and particularly heartening for England, who will be without fellow allrounder Ben Stokes because of a trial on a charge of affray when they look to go 2-0 up during the second Test of a five-match series at Lord’s starting Thursday.

Bayliss said the only problem he and England captain Joe Root faced in handling Curran, whose brother Tom has also played international cricket, was preventing him getting frustrated when not directly involved in the action.

“He wants to be in the fight – just like his brother,” said Bayliss. “They want the ball, they want to do the batting.”

As for being without Stokes, the Australian coach added: “Obviously it’s something we would have liked to have not been happening.”

England unsurprisingly called up allrounder Chris Woakes in Stokes’ place on Sunday. But new England selection chief Ed Smith has overseen several bold choices since taking charge at the start of the season and the inclusion of uncapped batsman Ollie Pope, like Curran a 20-year-old Surrey rising star, in a 13-man squad for Lord’s continued that trend. Pope replaced Dawid Malan, the Middlesex left-hander dropped after a run of low scores. 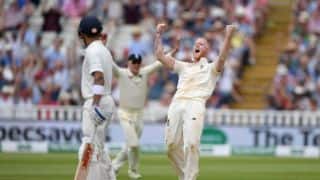 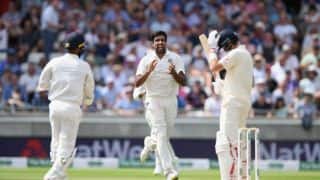