England set a target of 405 runs to win, were the more happy of the side going into tea with all their wickets intact. Alastair Cook and Haseeb Hameed batted and took time to settle in with Indian spinners being completely ineffective. Ravichandran Ashwin and Ravindra Jadeja toiled hard for 17 overs to give just 20 runs and go wicket less in the process. England are still 365 runs adrift of India’s target with Cook not-out on 28 and Hameed not-out on 12. Live Cricket Scorecard: India vs England 2nd Test at Vizag

Cook along with Hameed fended off anything the spinner had to offer, slowly their way towards the target. Cook particularly looked unfazed by Ashwin’s guile. Hameed on the other hand, played Jadeja with absolute ease. Both Cook and Hameed were reminiscence of Ab de Villiers, and Hashim Amla from the India vs South Africa Test, a year ago at Delhi, which was famous for being a blockathon.

Ashwin along with Jadeja bowled back-to-back 5 maiden overs, to which Cook and Hameed played copy book defensive shots. Ravindra Jedeja was soon called -in to partner Ashwin, and that he did quietly complementing the ace bowler. Ravichandran Ashwin was called on to bowl in the fifth over of the innings, who was on a hat-trick delivery. Cook easily fended off the hat-trick ball without much worry.

Umesh and Shami welcomed the pair of Cook and Hameed to some hostile short-bowling. Umesh caught Hameed on the hand, who was trying to fend the ball. England started their chase of 405 runs with skipper Cook and Hameed coming out it chase. Mohammad Shami started the bowling for India, and was spot on from his very first over. Umesh Yadav who partnered him kept the ball on the point as well.

Fast bowler Stuart Broad shrugged off a right foot injury to lead England’s fightback in the second Test in the first session as they dismissed India for 204. Broad and Adil Rashid claimed four wickets apiece as India collapsed from 98 for 3 to losing their last seven wickets for 87 as captain Virat Kohli top scored with 81.

The target would have been slightly less daunting but for a stubborn last-wicket partnership of 42 runs between Mohammed Shami and Jayant Yadav, who finished unbeaten on 27, that delayed the scheduled lunch break by 20 minutes . 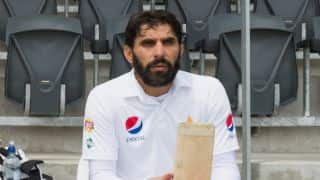 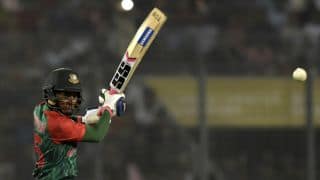