Eoin Morgan has been dismissed in England’s run-chase of 201 against India in the sixth One-Day International (ODI) at Perth. Morgan was dismissed by Stuart Binny as he lobbed a catch back to mid-on, where Shikhar Dhawan accepted it. England are 62 for four and are chasing 201 to win the game. The winner of this game will go into the final. 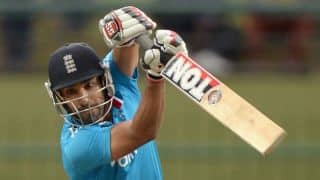