England are chasing 201 to win the sixth ODI.

Ian Bell has been dismissed early in England’s run-chase of 201 against India in the sixth One-Day International (ODI) of the tri-series. Mohit Sharma got one to bounce low and it hit Bell in front of the stumps. Bell is the man in form for England and this wicket is a huge development for India.

This pitch has had variable bounce through the day, with one climbing and the other keeping low. India have to exploit that to ensure that they can defend this total. The winner of this game will go through to the final of the tri-series and play Australia at Perth on Sunday. 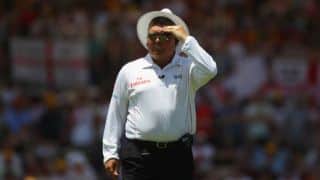