Keaton Jennings and Joe Root tried to send the pesky pigeon away, but to no avail. Jennings was bowled next ball.

Keaton Jennings had batted resolutely on the first morning for his 42 of the first Test between India and England, at Edgbaston, Birmingham. Then, as Mohammed Shami was about to start the 36th over, Jennings spotted a pigeon (not Glenn McGrath) at short mid-wicket, which seemed to affect his concentration. Jennings tried to shoo it away. When that did not work, captain Joe Root caused much hilarity by running towards it, arms flapping (as Aleem Dar stood expressionlessly at square-leg), but even that did not work.

Jennings dragged the next ball on to the stumps. However, when questioned by cricket.com.au after the match, Jennings refused to blame the pigeon: “The best players in the world have those lucky breaks go in their favour, but that s the way it is. I ve obviously made an error, misjudged the ball and it s ended up on my stump. That s the way it is.

“Thirty overs before, people were standing up behind the bowler s arm, so you could say that distracted me as well. You refocus, you go through your own process between each ball. I wouldn t say it distracted me at all. I suppose it just happens to be the ball before I got out that there s a huge hoo-ha about a pigeon.”

Pigeons have invaded cricket grounds for centuries. There are at least two instances of pigeon deaths during live cricket matches. In both instances, by Tom Hearne (intentionally, playing for Middlesex against Nottinghamshire at Lord’s) and by Jacques Rudolph (playing for Yorkshire against Lancashire at Headingley). 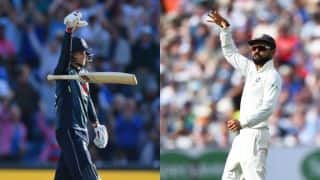 Has Virat Kohli’s mic drop celebration at Edgbaston set the tone for a feisty series?