CricketCountry brings out the major talking points from day one of the India vs England Test series opener at Edgbaston.

Day one of the first Test between India and England at Edgbaston ended wth the hosts on 285/9, having lost six wickets for 69 runs during the final session on Wednesday. England skipper Joe Root led the way with a busy 80, adding 104 for the fourth wicket with Jonny Bairstow, but the pair was separated in quick succession in the final hour as Virat Kohli s India hit back strongly to take the day s honours.

Here are the main talking points from day one in Birmingham.

As the India vs England Test series got underway way with Root winning the toss and opening to bat on Wednesday, the news that set Twitter abuzz and promises to make headlines was that India had dropped Cheteshwar Pujara. The team management opted for Shikhar Dhawan as opening partner to Murali Vijay and batted KL Rahul at No 3, which meant that Pujara had to make way.

It was a decision that would have surprised many because of two factors. One, Dhawan s scratchy form in the ODIs against England, his underwhelming batting average overseas and the fact that he failed to score in either innings of India s three-day tour match with Essex last week. And two, the fact that Pujara has been India s specialist No 3.

With questions being asked about his current batting abilities after a lean run in county cricket for Yorkshire this season – he averaged 14.33 in six four-day matches – and a poor Test average in England (22.20), Cheteshwar had done himself no favours by making 1 and 23 during the tour match with Essex. But conventional belief was that he would get the nod and that Rahul would open the innings given his experience at the one-down position.

Ashwin gets Cook, once again

India s first breakthrough came in the ninth over of the day, after Kohli tossed the ball to R Ashwin for the seventh. Ashwin was named as India s only spinner, and had plenty to prove given his record overseas. With his 11th delivery, he dislodged England s all-time leading run-getter, Alastair Cook. A teasing delivery landed on middle stump, gripped and turned past Cook s forward prod to hit off stump. It was something straight out of India vs England 2016. As the statisticians quickly informed viewers, this was the eighth time that Ashwin had dismissed Cook, joint with Nathan Lyon.

Mohammed Shami s first delivery of the Test was delivered from a bowler that looked ginger. The mind wandered back to all that Shami has had to deal with over the past few months, on and off the field, and then to the lovely wrist position he had displayed against Sri Lanka at home late in 2017 and in South Africa earlier this year. Was he 100%?

The jury is still out on that one, but with figures of 19-2-64-2 at the end of day one, Shami has done his job. The telling blows came during the second session, when he extracted Keaton Jennings and David Malan in the span off 14 deliveries.

Jennings, having done plenty of hard work, defended a short ball which subsequently dribbled off his thigh and then rolled onto the stumps (98/2). Soon after, Malan was dismissed from around the stumps, a back-of-a-length delivery jogging in and hitting the top of the batsman s pads (112/3). It wasn t top-drawer stuff from Shami, but his twin strikes lifted India.

Kohli cuts off Root – and shushes the crowd

At 216/3, England were coasting. Root was on 80, batting like a dream, and India were desperate for a breakthrough. It came out of the blue, with the England captain throwing away a century that was there for the taking. An ambitious call for a second run after Jonny Bairstow worked the ball past midwicket prove Root s downfall, with Kohli giving chase and returning a very fine throw to the nonstriker s end, the ball deflecting off Ashwin s hands onto the stumps.

As soon as a fuming Root kept walking, Kohli celebrated the wicket by blowing a kiss, raising a finger to his lips and then dropping an imaginary mic. It was always on the cards, given Root s mic drop celebration last month as soon as he raised his 13th ODI century to seal England s 2-1 win. Expect some more needle as the series continues.

Root s exit at 216/4 was followed by two quick wickets as England slipped to 224/6. Bairstow, on 70, poked with an angled bat at a delivery from Umesh Yadav – the weakest link in India s bowling today – that nipped back a touch and cramped him for room as he shaped to cut it.

Kohli went to Ashwin, who trapped Jos Buttler lbw for zero second ball. Buttler played half-heartedly at an offbreak that turned inland struck him on the pads right in front of middle. The batsman did not even bother discussing whether to review or not with Ben Stokes.

Stokes scratchy innings came to an end at 243/7 when he made a mess of an attempted whip off the pads against Ashwin, the result being a leading edge which the bowler happily accepted. It was a poor delivery, but an even poorer shot. 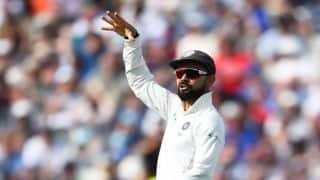