The Karnataka allrounder, part of India s win at Lord s in 2014, looks back at a memorable Indian victory

For Stuart Binny, India s Test tour of England in 2014 will remain a part of his cricketing journey. The Karnataka allrounder, son of 1983 World Cup winner Roger Binny, made his Test debut in the series opener at Trent Bridge, scoring a vital 78 in the second inning as India drew the match, and featured in the famous victory at Lord s which was India s first at the hallowed venue in 28 years.

As India begin the first of five Tests against England starting today at Edgbaston, Binny recalled the 2014 tour and what it felt like to win a Test match at Lord s – which his father Roger had also tasted back in 1986.

That day [his debut] is very fresh in my memory. After having failed in the first innings. I walked out to bat with a lot of nerves and a huge task ahead of me, to save the Test match for my country. I guess my experience through domestic cricket, batting at No 6, helped me play the innings that I did, said Binny, who is the holder of the best bowling figures for Indian in ODIs.

Obviously there were a lot who spoke about me missing a hundred on debut. But if you had asked me six months prior, I would take saving a Test match for my country any day. We had our backs to the wall going into the first Test, but the mood was positive because we had practiced and planned to play a certain brand of cricket in England. Which was to come out fighting.

An Indian team emerging unscathed from the first Test of a five-match series overseas was rare. As the team moved to London for the second Test, the mood in the camp was positive but matters looked bat after a shaky start at Lord s. India found themselves in trouble on day one, after Alastair Cook opted to field. Ajinky Rahane, in his seventh Test, walked out to bat at 113/4 on a green-tinged surface. What followed was a tremendous innings by an Asian batsman at Lord s, which helped India to a healthy 295.

For us watching in the dressing room, Ajinkya proved that it was possible to score a hundred in English conditions. For me personally, I appreciated his positive mindset and approach, recalled Binny.

That England did not run away with a handy lead owed largely to Bhuvneshwar Kumar, who took 6/82 in 31 overs of controlled, probing swing bowling to limit the hosts to 319. In the second innings, India found noteworthy and contrasting efforts from Murali Vijay, who batted 378 minutes for a zen-like 95, and breezy fifties from Ravindra Jadeja (68 off 57 balls) and Bhuvneshwar (52 off 71) to finish on 342. That set England a target of 319 to go up 1-0.

In Binny s view, the contributions of Bhuvneshwar and Jadeja were inspirational.

Bhuvi s consistency with line and length was something I remember vividly, and his ability to swing the ball both ways. His spell set up the Test match for us, he said. Then Jaddu went in with a mindset to score runs, he backed his innings with a positive approach. We fed of that energy to bowl out England in the second innings.

India made 342 in the second innings, and Binny reflected on how confident the team was of winning.

Obviously we felt we were in with a chance. It was yet another opportunity for our bowlers to step up to the task. They were brimming with confidence. After Ishant and Shami struck on the fourth evening [to reduce England to 72/4] we knew the next morning would be crucial, with an aim to pick up early wickets. A good night s rest was the need of the hour.

On the final morning, Joe Root and Moeen Ali denied India a wicket until the last over before lunch. Then Ishant Sharma ran in and bounced out Moeen, and on resumption in the afternoon he bowled a spell for the ages. Batsman after batsman fell prey to the horizontal bat shots and England crashed from 198/4 to 233 all out.

For me personally, that was one of the best spells I have ever seen. Ishant bowled with a lot of heart even though he was exhausted, said Binny. It was special to win that Test match at the home of cricket, with the Indian fans cheering us on. After all the celebrations, I discovered that the last time India had won a Test match at Lord s, some 20-odd years ago, my father was a part of that team. It made the win even more memorable. 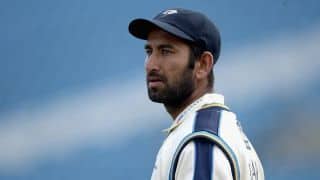