This win over England at the spiritual home of cricket helped MS Dhoni s team end a sorry run of 14 overseas Tests without success, and will be remembered primarily for two performances: Ajinkya Rahane s stirring century on day one and Ishant Sharma s fiery spell on the last day.

Sandwiched between these two heroic efforts were critical contributions from Bhuvneshwar Kumar, Murali Vijay and Ravindra Jadeja, but when history is recalled, India s win at Lord s in the summer of 2014 will be remembered most for Rahane and Ishant.

Rahane, in his seventh Test, walked to the middle at the fall of India s fourth wicket with 113 on the board. The batsmen before him had struggled to cope with the seam and swinging on offer at a green-tinged Lord s, but the 26-year-old batted on a different level, driving and clipping with a crispness and flair not usually associated with visiting Asian batsmen at this hallowed venue.

With Bhuvneshwar Kumar, Rahane added 90 for the eighth wicket – he would later acknowledge the lower order for their guts – and when he was out for 103, India had been revived to a healthy 275/9. The next highest contribution to the final total of 295 was Bhuvneshwar s 36. To score a century in your first Test at Lord s is something special, and in Rahane s case it proved match-winning.

READ: A statistical review of the Mecca of Cricket

That England did not run away with a handy lead owed largely to Bhuvneshwar, who took 6/82 in 31 overs of controlled, probing swing bowling to limit the hosts to 319.

Batting a second time, India found noteworthy and contrasting efforts from Murali Vijay, who batted 378 minutes for a zen-like 95, and breezy fifties from Ravindra Jadeja (68 off 57 balls) and Bhuvneshwar (52 off 71) to finish on 342. That set England a target of 319 to go up 1-0 in the best-of-five series. What followed was the stuff of legends.

After tea on day four, Dhoni called on Ishant for a second spell. England were well placed at 70/1 before Mohammed Shami extracted the first-innings centurion Garry Ballance, and then Ishant grabbed two make it 72/4. Ian Bell (1) was rushed into a loose prod that failed to make contact and saw the stumps rattled and Cook (22) nicked off to Dhoni.

Joe Root and Moeen Ali batted out the remainder of the final session and continued their resolute approach through the fifth morning, until just before lunch when Ishant was again summoned. Bowling the last over of the morning session, Ishant banged in a short delivery to Moeen which caught the batsman unawares. The ball was fended to show leg and happily gobbled up. England s chase had been dented and Ishant had his tail up.

Post lunch, Ishant delivered a hostile and match-winning spell that floored England. Their batsmen appeared confident in dealing with the short-pitched assault but it all proved foolhardy; Matt Prior and Ben Stokes picked out deep midwicket and Root (66) found deep square leg as the chase went from 198/4 to 223 all out in a breathtaking flurry.

Standing tallest was Ishant with figures of 23-6-74-7, career-best figures in India s first win at Lord s in 28 years. 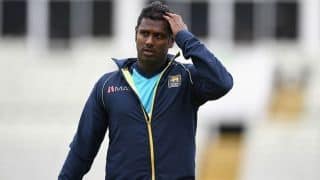 "We will not tolerate any indiscipline": Angelo Mathews on Danushka Gunathilaka suspension