India s only tour match before the start of the five-Test series against England in Birmingham next week did not get off to a promising start, with Shikhar Dhawan, Cheteshwar Pujara and Ajinkya Rahane falling in the first session against hosts Essex at Chelmsford on Wednesday. That India did not lose further wickets before lunch owed to a busy stand worth 56 in 9.3 overs between Virat Kohli (32* off 34 balls) and Murali Vijay (45* off 80), taking the score to 100/3.

When Kohli won the toss and chose to bat, he would have hoped that the top order got going against Essex s bowling in humid conditions, but the result was far from satisfactory. Dhawan, his place in India s XI for the Edgbaston Test far from secure, was out first ball to Matt Coles, edging behind to the veteran wicketkeeper James Foster.

In his second over, Coles had another when Pujara (1) also edged to Foster. That left India sweating at 5/2.

Rahane s 47-ball 17 eased the nerves somewhat, and it was through him that the first boundary of the innings came in the tenth over. However, a start was not converted into something substantial. Matthew Quinn, Coles new-ball partner, found Rahane s edge to present Foster a third catch.

By this time Vijay had accumulated 23 runs in 45 balls to underline his reputation as a batsman of pedigree in England (he scored 402 runs in five Tests in 2014), and that watchful approach was extended to the lunch interval. Kohli began in a hurry, hitting four boundaries in his first 18 balls faced, and raised India’s 100 just before the break with his sixth four. 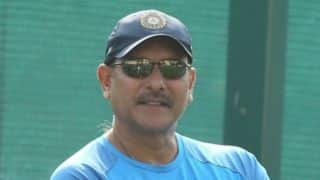 Indian team aims to be the best traveling side; won't make excuses about conditions: Ravi Shastri