While MS Dhoni, the batsman, did not have any role to play as India beat New Zealand in Napier, Dhoni, the wicketkeeper, was at his best.

While MS Dhoni, the batsman, did not have any role to play as India beat New Zealand in Napier, Dhoni, the wicketkeeper, was at his best as the Indian bowlers bundled out Kane Williamson-led side for 157 in 38 overs. (ALSO READ: India vs New Zealand, 1st ODI: FULL SCORECARD)

Although Dhoni had only one dismissal against his name as he stumped Lockie Ferguson for a duck off Kuldeep Yadav, Dhoni’s reading of the game and of the batsman was top notch and his tips handed Kuldeep his fourth wicket of the match.

The incident took place right ahead of the final delivery of the 38th over, which also was Kuldeep’s last over. Kuldeep had bowled first five deliveries of the over, bowling over the wicket. On Dhoni’s advice, he chose to go around the wicket and dismissed Trent Boult to end New Zealand’s innings. (ALSO READ: We need to be better, this wasn’t our best effort: Kane Williamson)

The stump mic caught Dhoni, saying, “Rokega. Yeh aankh band karake rokegaa. Idhar se daal sakataa hai. Udhar se andar nahee aaegaa (He will defend. You can ball from this side (around the wicket). The ball will not turn (come in) from the over the wicket).”

Boult did exactly what Dhoni had told Kuldeep and Rohit Sharma took an easy catch in the slips to end the New Zealand innings for 157.

37.6 : Dhoni to Kuldeep – 'He will block the ball blindly you should ball round the wicket near stumps'

Kuldeep bowled the same and he got the wicket of Trent Boult.

India, whose target was then reduced to 156 as the excessive sunshine stopped play, chased down the total in 34.5 overs, with eight wickets to spare. (ALSO READ: Virat Kohli happy with ‘most balanced performance’)

While Rohit Sharma could only score 11, Shikhar Dhawan’s unbeaten 75 and Virat Kohli’s 45 helped India win the match and secure 1-0 lead in the five-match series. 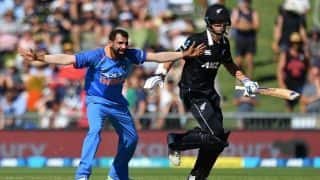 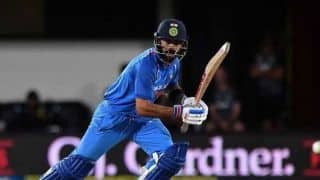