If New Zealand lose the fifth ODI, it will be their fourth successive ODI defeat at the Westpac Stadium in Wellington.

While the series is already won, India will be out to prove a point against New Zealand in the fifth and final ODI of the series at the Westpac Stadium in Wellington on Sunday. (ALSO READ: India vs New Zealand, 5th ODI, LIVE streaming: Teams, time in IST and where to watch on TV and online in India)

While MS Dhoni s return from the injury and Martin Guptill s likely absence from the series-closing ODI have been some of the talking points ahead of the game, Rohit Sharma, who is leading India in Virat Kohli s absence, will like to make sure India win their final ODI outside Asia before the 2019 ICC Cricket World Cup. (ALSO READ: MS Dhoni boost for India seeking an improved batting show)

For the Kane Williamson-led unit, it will be keen to repeat their Hamilton showings, where Trent Boult reduced India to their seventh lowest total in ODIs to set up New Zealand s eight-wicket win and their first win in the five-match ODI series, and end the series on a winning note. (ALSO READ: Last game was an aberration Bangar)

While New Zealand may have to change the winning combination if Guptill is not match-fit, India may have to bench Shubman Gill, who made his international debut in the fourth ODI, as Dhoni, who missed the third and fourth ODI, is set to return. India may also make a change or two to their bowling unit with Khaleel Ahmed making way for Mohammed Siraj with the spin-bowling duo of Yuzvendra Chahal and Kuldeep Yadav are most likely to be a part of the playing XI. (ALSO READ: Dhoni declared fit for fifth ODI)

Where to watch: Star Sports Network/Hotstar

With Martin Guptill being an uncertainty, Colin Munro will get another look in as New Zealand looks to get their opening combinations right for the 2019 ICC Cricket World Cup. Guptill hurt his back during the fielding drills ahead of the fifth ODI at the Basin Reseve. Barring a possible Guptill change, New Zealand will be eager to retain the same playing XI that thoroughly outplayed Rohit Sharma-led Indian side in the fourth ODI. (ALSO READ: Martin Guptill suffers injury in training, could miss 5th ODI vs India)

MS Dhoni’s return will bolster India’s middle-order which was found wanting in the fourth ODI in the absence of Virat Kohli and a rare failure from both the openers – Rohit Sharma and Shikhar Dhawan. However, Dhoni’s return may see Shubman Gill getting benched a game after he made his international debut. However, the likes of Ambati Rayudu and Dinesh Karthik will have to prove that they shall be a part of India’s middle-order in the 2019 ICC Cricket World Cup in England. The two had a chance in the fourth ODI but failed.

If New Zealand lose the fifth ODI, it will be their fourth successive ODI defeat at the Westpac Stadium in Wellington.

His (MS Dhoni’s) record speaks for itself. He is a fantastic player. I know there were some noises in the Indian media if he should be in the World Cup squad or not. He has got that calm demeanour in the middle-order. When you are bowling to him, you know you have not got the game won until you get him out. – Jimmy Neesham You haven't won the game until you get MS Dhoni out: Jimmy Neesham 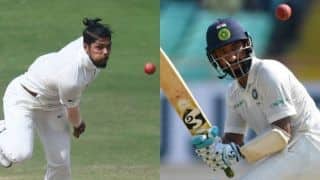