Stead alluded that three spinners is a possibility and that a second wicketkeeper has to locked.

After New Zealand were beaten 1-4 in home ODI series by India, the coach Gary Stead has revealed that the team management is on the verge of identifying the 15 players to take to this summer’s ICC Cricket World Cup.

The deadline for boards to submit their squads for the World Cup in England is April 23, and New Zealand have one final ODI series left before that – the three-match series with Bangladesh starting next week. (READ MORE: I won’t drop struggling Blackcaps stars: Gary Stead)

Speaking after the fifth ODI defeat to India on Sunday in Wellington, Stead alluded that three spinners remains a possibility and that a reserve wicketkeeper has to locked. Mitchell Santner is the confirmed spin-bowling allrounder, with the wrist-spinning pair of Todd Astle and Ish Sodhi next in line.

“We’re close to getting the 15 that we think is the right 15,” he told reporters at Westpac Stadium. “There’s room for three; there’s 15 places and you can take as many as you want. There could be room for three.

“It depends a bit on the summer but if you take the last few years for example, two spinners have been a little bit of the norm. You look at the way England structure their side, they usually have Moeen Ali and Adil Rashid. It’d be silly of us not to look at the way they play in their conditions.”

The nature of the second wicketkeeper is not certain. Tim Seifert did the job in three ODIs against Sri Lanka month when Tom Latham was rested. In those matches, Seifert held seven catches and effected a stumping, and batting at Nos 6 and 7 he made 11 off 10 balls and 22 from 17. (READ MORE: Tim Seifert chases World Cup spot)

Henry Nicholls, who last week presented himself as an opening option at the World Cup by filling the role when first Colin Munro was dropped and then when Martin Guptill injured himself, is also an option, said Stead.

“He’s done a little bit of dabbling in the past and it’s something we still have to work out with the complete balance of the 15; take the extra keeping backup or look at another option,” he said. (READ MORE: Nicholls could be one of New Zealand’s World Cup openers)

After beating Sri Lanka 3-0 with scores of 300-plus in each game, New Zealand were out-classed by second-ranked India in four of the five ODIs.

“I was disappointed with [Sunday] because I think we could have got up and won it,” said Stead. “There are similar ways we’ve been playing that we haven’t quite got right yet. Chasing, we’re just losing too many wickets early. That’s something we’ll address as a team and hopefully keep improving.”

The first ODI between New Zealand and Bangladesh is on February 13 in Napier. 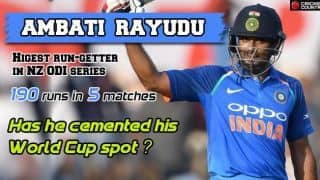 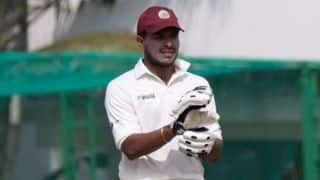