Ravindra Jadeja dismissed Luke Ronchi in the second innings of the second Test at Eden Gardens to make his tally of dismissing Ronchi for four times in four consecutive innings. Jadeja has dismissed Ronchi in all the four innings of this Test series so far. Jadeja clean bowled Ronchi as the batsman was unable to play an arm-ball from the bowler. The ball took the bats inside edge which dragged the ball onto the stumps. New Zealand are currently under the dark shadows of losing the Test series by a margin of 2-0 in the three-Test match series before the last match is played at Indore from 8th of October. Full Cricket Scorecard, India Vs New Zealand 2nd Test at Kolkata

Ronchi has been amongst the consistent players for the visitors to keep Team India at bay from the victory. In the first innings of the first Test, Ronchi made a score of 38 off 83 balls which consisted six boundaries. The batsman made a stand of 49 runs along with Mitchell Santner before Jadeja trapped Ronchi. It was a straighter delivery from Jadeja which had pitched in line and would have gone to hit the off-stump eventually. ALSO READ India vs New Zealand 2nd Test Day 3: Highlights

In the second innings of the same Test, Ronchi played a wonderful innings of 80 from 120 balls which were laced with nine boundaries and one huge six. Ronchi along with Santner once again were fighting a stern battle to save the match for the visitors. But it was after the drinks break that Jadeja tossed up a delivery and Ronchi could not resist the temptation as he danced down the track to heave one over mid-wicket. But the ball slowed down after pitching resulting in Ronchi mistiming the shot and serving out an easy catch to Ravichandran Ashwin at point New Zealand eventually lost this series opener by 197 runs.

In a bid to level the series in the second ongoing Test at Kolkata, Ronchi was again trapped by Jadeja on his pads. But this time, the bowler got lucky as the ball would have easily missed the leg stump after pitching. It was again an arm ball from Jadeja which did not spin much after pitching. but as the bowler was bowling from round the wicket, it would have easily missed the leg stump. The batsman had scored 35 off 52 balls which included five boundaries and one huge six.

With such an impressive record against such a strong batsman like Ronchi, India will definitely be relaxed with such stats which can prove very helpful in the last Test of the series.

Interestingly, Indian pacer Mohammad Shami has also dismissed New Zealand wicket-keeper batsman BJ Watling three times in the four innings so far. In the first and the second innings of the first Test, Shami’s late inswinger pitching outside off came in which took the batsman by surprise eventually trapping the batsman in his pads. In the second innings of the second Test, again an inswinger from Shami pitching outside off stump came in, and this time around the batsman was too late to get his bat down and eventually got his off stump uprooted doing a cartwheel.

India are on course to win this Test and win the series and also move on the ladder of the ICC Test team No.1 ranking pulling down Pakistan. 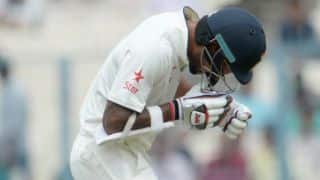 India vs New Zealand: Shikhar Dhawan likely to be sidelined for 3 weeks