India re already leading the three-Test series by 2-0 and will play the final clash at Indore on Saturday starting at 09:30 IST

India and New Zealand will meet for the final Test at the Holkar Stadium in Indore for the final Test clash on Saturday. Catch the live cricket streaming of India vs New Zealand third and final Test at Indoreon StarSports.com and Hotstar along with the live telecast at Star Sports HD 1 and Star Sports 1. Yes, for the first time ever, Indore is hosting a match and it is all set to be pompous and an electrifying experience. The live streaming will show India marching with confidence in the final Test after clinching the series from New Zealand. The match might be pretty dead-rubber but with all the players who had missed out on the series will be found in the squad for both teams, it will only get interesting. FULL CRICKET SCORECARD: India vs New Zealand, 3rd Test at Holkar Stadium, Indore

India will aim for 3-0 while New Zealand will salvage their pride by winning the final Test. The visitors have shown equal competition but the Indian lads have done their task well by either scoring quick runs or grabbing wickets at regular interval. Ravichandran Ashwin, Wriddhiman Saha, Virat Kohli, Rohit Sharma, Ravindra Jadeja, Cheteshwar Pujara and Murali Vijay are to name a few who have done their bit in this series. India do have some bad news around the corner as well with their opener Shikhar Dhawan and Bhuvneshwar Kumar missing out the final Test.

That opens door for Karun Nair and Gautam Gambhir, who are waiting to make India proud. Shardul Tahakur has also been included for the pacer Bhuvneshwar. Shardul had a fair outing in the India A quadrangular series against Australia A and got plenty of wickets. About time India give the due importance to the young bunch of the Indian team. As for the Kiwis, skipper Kane Williamson is likely to comeback as well as Jimmy Neesham who missed out the first two Tests. New Zealand will need their old players to boost the younger bunch and help them win the final clash. LIVE CRICKET UPDATES: India vs New Zealand, 3rd Test at Holkar Stadium, Indore

However, the focus and limelight in this series has been the return of Gambhir. A lot of them were disappointed of not finding Gambhir in the squad although one could spot him on the field. All the eyes will be waiting to see him take the bat on hand and score those big runs. The Indoris are waiting to witness those big runs coming their way from both the ends. However, if rains do not play spoilsport, a cracker of a game is on cards. ALSO READ: India vs New Zealand, 3rd Test: Gautam Gambhir will play 3rd Test, confirms Virat Kohli

The pitch has historically been good for batting. While Kohli thinks it will have decent carry, Williamson expects turn and may go in with three spinners.

Live streaming has helped many to stay in touch with game through various mediums and with the hlp of technology going way too ahead, what a better way than social media. It is not only websites but also streaming over mobile that has made it handy for the cricket audience who wanto stay in touch with ongoing match. Through live streaming, one can not only watch the match but also share the experience with their family or friends around. 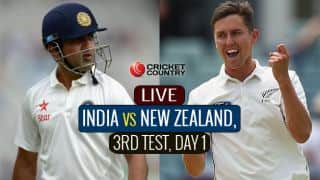